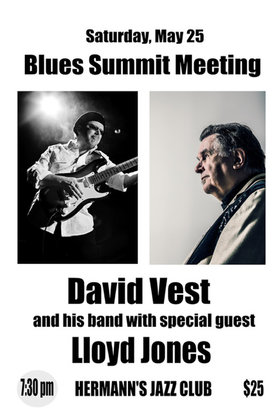 Music: Jazz / Blues
David Vest welcomes guitar hero Lloyd Jones, one of the finest American blues artists, for a high-level “summit meeting of the masters,” backed by members of David’s band. Make your reservations early, because this show will sell out.

Vest and Jones have played many times with each other, and they both played extensively with harmonica great Paul deLay. Says Vest, “I was in Paul’s last band, and Lloyd was in his first one, the legendary Brown Sugar.” They are sure to perform a few of deLay’s classic tunes as well as their own songs and classics of the genre.

David Vest is a five-time Maple Blues Award winner in Canada. Lloyd Jones is a member of the Oregon Music Hall of Fame and has won many awards for his music. Both artists have headlined at blues festivals around the world.