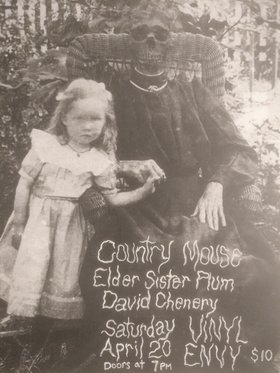 Country Mouse (Nanaimo, BC)
https://countrymouse.bandcamp.com/releases
Nanaimo's doom country rats, Country Mouse, will return to our humble record-store stage and play some dark americana destined to draw you towards Death's door! There is certainly an ethereal eerieness that encompasses their sound~

with
Elder Sister Plum (Victoria, BC)
http://eldersisterplum.bandcamp.com
Elder Sister Plum uses subtle guitar playing and emotionally charged lyrics to pour her heart out and let you wade in the waters of her inner world. Her swashbuckling folk lullabies and musical ghost stories provide a dreamy landscape that anyone can get lost in. Elder Sister Plum has played RIFFLANDIA FESTIVAL, Vinyl Envy - 4 Year Anniversary Weekend AND played our very first in-store show in 2015~

and birthday boy:
David Chenery (of The HEX) [Victoria, BC]
Yes it's David Chenery's birthday and we're celebrating with a live show featuring a unique solo set from David himself! David is a killer songwriter / guitarist in local rock band The HEX!
David's voice is haunting and plays on the darker side of country and his songs will take you on a journey

Nightmare poems wrapped in traditional styled folk songs, D. Chenery has played at Thursdays' with Clay George, the Brickyard and The Blenz Cafe. He is currently recording a CD in a black hole of a basement. Influenced by guys like Hank Williams, Ledbelly, The Velvet Underground... more info
Submit info on this show to our admins