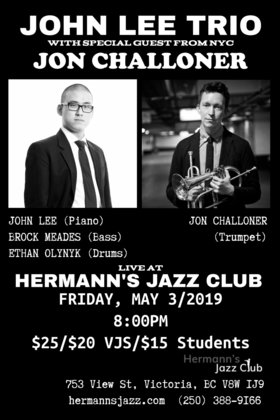 Music: Jazz / Blues
JOHN LEE TRIO presents a concert at Hermann's Jazz Club with special guest from NYC Jon Challoner on the trumpet. Drawing repertoire influence from the Great American Songbook and beyond, this quartet brings new life to old songs while finding a contemporary yet traditionally rooted sound in their improvisational interpretations.

JOHN LEE
Raised in Nanaimo BC, John Lee is one of the most respected and acclaimed young jazz musicians nationwide. After showing great interest in music at a young age, Lee developed into a virtuoso by his late teens and by the time Lee completed his high school studies he had received a remarkable amount of recognition by prominent jazz musicians in Canada and earned an impressive array of awards, scholarships and honors from Envision Jazz Festival, MusicFest Canada and Lionel Hampton Jazz Festival. Through the recommendation of Ingrid Jensen (Terri Lyne Carrington, Maria Schneider Orchestra) and Christian Fabian (Lionel Hampton Big Band, Jason Marsalis), Lee applied to the prestigious Berklee College of Music and received a full tuition and housing scholarship. Lee completed his undergraduate studies in May 2016 and received a Bachelor of Music in Performance. In addition to his academic training in Boston, Lee was mentored by world-renowned jazz educators Dave Santoro, Terri Lyne Carrington, Ralph Peterson Jr., and John Clayton. After relocating back to Canada and residing in Victoria BC, Lee has become an in-demand musician for accompanying visiting artists and has had opportunities to perform with artists such as Buster Williams, Rudy Royston, George Colligan and Misha Piatigorsky.

John Lee currently leads his own project called Next Generation Jazz Collective and his own trio while working with Cory Weeds (Cellar Live/Reel to Real label) as a hired sideman on many different projects and performances in the Vancouver scene. Lee is also in early concept development stages for his debut album which he is planning on releasing under the Cellar Live label. http://www.johnleemusician.com
-----------------------------------------------
JON CHALLONER
Jonathan Challoner is one of Canada's most exciting and versatile young trumpet players. Originally from Vancouver Island, he began his musical career under the tutelage of Canadian legends Ingrid Jensen, Arnie Chycoski and Phil Dwyer. He relocated to Ontario, where he became involved in every facet of Toronto's culturally and stylistically diverse music scene. He now lives in New York City and studies at the Juilliard School.
In addition to leading his own quintet, Jonathan is the co-leader of the genre defying Heavyweights Brass Band. He has also shared the stage with artists such as Dave Douglas, Seamus Blake, Paquito D’Rivera, Giovanni Hidalgo, Kermit Ruffins and the Juno Award­ winning John MacLeod Orchestra, among many others.