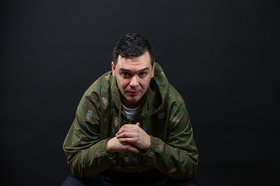 Music: Funk / R&B, Hip Hop / Rap, Reggae / Ska / Dub
One of Canada's most formidable MC s, DEF3 has spent a career establishing himself as a pillar of the hip-hop community. On the mic or in front of a canvas with a spray-can in hand, Def3's deep love of and respect for the roots of hip-hop culture is at the forefront of whatever he does. Always working to help push the culture forward, much of his recent work has found him working to bridge the divide between old-school hip-hop and heavy bass-music. His incredible album Small World found Def3 working with Late Night Radio, one of the hottest hip-hop bass producers in North America, and who he's apparently just recently finished recording another album with. So expect some new, equally dope stuff from the homie Def3 as he takes the intimate stage at Lucky Bar.

Getting things spiced up before Def3 will be Mexico-to-BC transplant and musical powerhouse GANJO BASSMAN. The man known has Ganjo spent his time with a variety of bands in his native Mexico before developing his own signature sound. Dubbed “rock-reggae-hop” Bassman's music is a blend of unique, shifting basslines, grunge guitars, and hip-hop drum beats wrapped in reggae aesthetic. A blast of straight reggae energy to get things sweaty on a Friday night.

Def3 is an award winning hip-hop artist from Regina, Saskatchewan whose made a name for himself amongst industry peers in the Canadian music scene as well internationally. His 2014 album Wildlif3 received ‘Rap Recording Of The Year’ at the 2015 Western Canadian Music Awards and reached #1 overall nationally on Earshot (Canada) and #8 overall on... more info
Videos:

After years of playing with a number of bands in his home Mexico, the man called Ganjo formed his own project, GANJO BASSMAN, to expand on the unique sounds he heard in his head. A singer-songwriter and producer, the talented Ganjo starting creating music he refers to as “Rock-reggae-hop.” It's a blend of unique, shifting basslines, grunge guit... more info

The Miles Skye Club are a tight six-piece blending sultry soulful blues with jazz, hip-hop and funk. They will have you dancing along to uplifting West Coast soul music, and then steal your heart with their seductive rhythms and powerful vocals, only to bring it all back up to dancing speed with some funky, flavourful hip hop vibes. more info
Submit info on this show to our admins