When Schwey (originally Funk Schwey), formed in 2013 founders Isaiah Dobbs (bass/vocals) and Jacob Schwinghammer (keyboards) were teenagers attending high school, and neither they nor most of their fans were old enough to get into licensed clubs. Their first gig was at an outdoor basketball tournament. Soon, they became familiar faces in Vancouver’s underage art spaces.

“There’s a lot of underground venues in Vancouver that are kind of punkoriented,” Jacob points out. “We don’t play punk music.”

At this, Isaiah chimes in: “But we have to match that energy in our own way. That’s why we have very exciting shows—it’s all for the kids who want to get down.”

In pursuit of the most electrifying show possible, the band throws all confines of genre out the window: funk influences meld with with modern pop, and R&B fuses with swaggering hip-hop and surging indie rock. Dobbs’ playful, velvetvoiced hooks provide the focal point for earworm dance tracks, while Schwinghammer adds sonic richness with his jazz-trained keys. Whether picking up the party with a G-funk banger or slowing things down with a sexy soul ballad, their focus never changes: “It’s all about groove,” Dobbs says. “We didn’t choose the genre. We just started playing music and it naturally turned out like that.”

Having wowed local audiences, Schwey signed with 604 Records, and the bandmates are now focused on capturing their sizzling live energy in the studio. They have recorded an album’s worth of songs at 604 Studios, with Dobbs and Schwinghammer splitting production duties and meticulously adding overdubs at home. During the sessions, the band’s core members were joined by longtime collaborators Zak Haddad (drums) and Ben Robertson (guitar).

So how did they succeed in translating their thrilling live show into an album? “That’s the ultimate question,” Schwinghammer says with a laugh. “We’ve approached it in a few different ways—we’ve tracked a song with the whole band together, and then we’ve tracked a song where I lay down electronic drums and play synth bass.” The sound is crisp and organic, making for an anything-goes party where the musicians’ perfectionism never interferes with the feel-good vibe. Dobbs’ smooth voice is the glue that binds the diverse recordings together.

The album, which was mixed by Jimmy Douglass (Justin Timberlake, Jay Z, The Internet) and mastered by Dave Kutch (Solange, Khalid, Calvin Harris) reflects just how far Schwey has come since the days of playing underground art spaces: the songs are catchier, the arrangements are more refined, and the musicianship is tighter. The band now routinely fills the clubs that its members were once too young to enter. But growing up doesn’t mean slowing down. Whether you’re a longtime fan or a new listener, this party is only getting started. Their debut single, ‘Our Rhythm’ will be released by late 2017.

Diamond Cafe - [Victoria] - [Synth Pop]
Diamond Cafe is the solo project of Canadian artist Tristan Thompson. Out of his bedroom he blends the sounds of synth pop and R&B with a beautiful touch on sex and love. "The Way You Used To Love Me” is the latest and most recognized Diamond Cafe song being featured on HBOs Ballers and countless playlists. 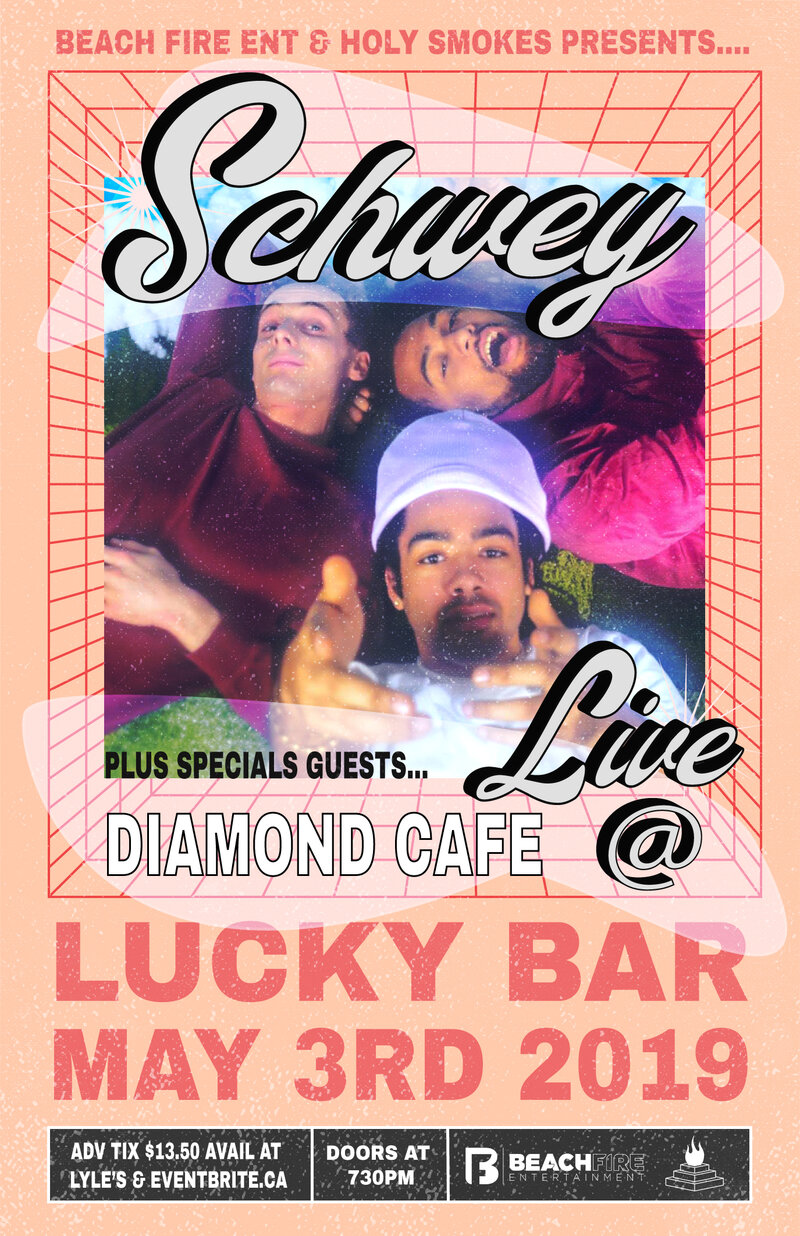