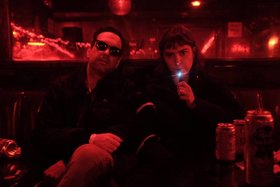 Black Marble formed in 2012 as an artistic extension of Chris Stewarts collection of songs and ideas. The name Black Marble took some time to arrive upon and is more than fitting. As a literal description of a material used to sculpt and build, its the fleeting notion of a one-time symbol of taste and affluence, frozen in a moment, slightly dusty and showing every smudge and mark. Started in a recording space in Bushwick, NY, Black Marble made their first EP, Weight Against the Door (Hardly Art) followed quickly by their chillingly moody and atmospheric debut full-length, A Different Arrangement(Hardly Art).

With both early releases the band followed a familiar path stomped down by synth wave pioneers whose hand assembled sounds and DIY ethics paved the way for likeminded artists. While taking inspiration from late 70’s and early 80’s projects like Silicon Teens, Iron Curtain, Lives of Angels, and Solid Space, Black Marble dialed in on a clear understanding of its own specific sound. After the release of A Different Arrangement in the fall of 2012 there was an almost immediate clamoring from fans for a new album but they were made to wait several years, for good reason. With the end of the East Coast chapter of Stewart’s life on the horizon, Its Immaterial was recorded in a period of mental and physical transition. Trapped between spaces and unable to move on until the snow globe flurry of ideas floating around him settled just right.

On September 30, 2016 Black Marble will release their second full-length, Its Immaterial, on Ghostly, and from a new locale, the West Coast. Still featuring Stewart at the helm along with select collaborators as supplementation, the bi-coastal shift lends a great deal to the overall feel of the new album. The light and dark elements of shadows. The salt and sting of evenings high tide sea spray. A beautiful thing left on a shelf too high to maintain. The general mood is that of creating something new, but going back in time to do it. Like attempting to flesh out a song that you woke up humming but cant find, because it doesnt exist yet.

Froth is a band formed in 2012 in Los Angeles, CA, by four friends who had never played in bands before. They released two albums in 2014 and 2015 before signing to Wichita Recordings in 2017 and releasing Outside (briefly).

Across the ten songs, the band dialed back the noise and psych-pop found on their previous LPs to reveal delicately beautiful melodies, intricately arranged instrumentals, and some of their most experimental song writing to date. This evolution revealed new dynamics of Froth’s sound, resulting in a moodier and more atmospheric bend to their shoegazing melodicism and pop sensibilities, mixing the driving, tuneful drone of first single “Contact” alongside the epic squall of the intertwining guitars on “Passing Thing” and the more spare, meditative landscape of “Show A Flower A Candle And It Grows.”

Following the release the band toured extensively in the US and Europe, including dates supporting RIDE and Interpol. The band is set to release their fourth studio album Duress on Wichita Recordings in spring 2019.

//
Accessibility Info:
This venue is located up a flight of stairs with a railing. Unfortunately, the washrooms are not wheelchair accessible. If you have any questions regarding accessibility, please email [email protected]

This event will take place on the unceded territory of the Lekwungen, Songhees and W̱SÁNEĆ peoples.