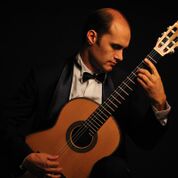 Russian guitarist Rovshan Mamedkuliev has received over 25 awards in national and international competitions. In 2012, he won the Guitar Foundation of America International Concert Artist Competition - one of the world's most prestigious guitar competitions.

Rovshan has performed in major cities in Europe and in the United States (including a notable performance at Carnegie Hall in New York City in 2012). He has also performed with a variety of ensembles and orchestras around the world including l’Ensemble orchestral de Valencia (Spain), Orchestre du Conservatoire National de Musique Superiur de Paris (France), Azerbaydzhanian State Chamber Orchestra, among others.

Having visited Canada on tour a few years ago, Rovshan is excited to be back and present a debut concert in Victoria. His performance style is distinguished by thoughtful interpretations, vibrant and timbrally rich sound, and the ease in connecting with audiences worldwide. In program: music by Paganini, Aguado, Koshkin, Walton, Amirov, Barrios.