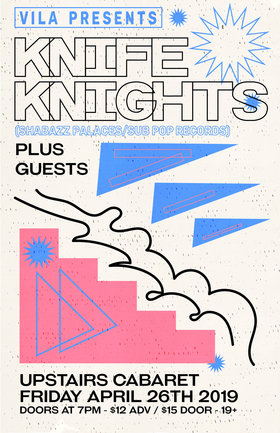 Knife Knights were born of the love of mystery.

A decade ago, Ishmael Butler—the architect of the groundbreaking but long-disbanded hip-hop group Digable Planets—was preparing at last to emerge from years of near-complete silence. He unveiled his new outlet, Shabazz Palaces, in the summer of 2009 through a pair of self-released EPs, surrounding his hyperlinked verses with webs of psychedelic textures and refracted rhythms. From the start, confidentiality seemed essential: Butler wanted Shabazz Palaces to stand on its own strength, not his outsized reputation, so he adopted a nom de plume for himself.

As the project’s network expanded, though, he needed new monikers for his partnerships. Knife Knights is the name he gave to his work with Seattle engineer, producer, songwriter, and film composer Erik Blood, a vital force in the Shabazz Palaces universe. Now, after more than a decade of collaboration and the development into of a rich friendship, Butler and Blood have made a proper full-length record together as Knife Knights: 1 Time Mirage, an eleven-track odyssey that finds the pair and a cast of their friends weaving together a singular world of soul and shoegaze, hip-hop and lush noise, bass and bedlam. 1 Time Mirage represents a playground for Butler and Blood, a free space for unfettered exploration, and a radically adventurous start to something much more than a mere production duo or side project.

In the decade since Butler launched Shabazz Palaces and first christened his partnership with Blood as Knife Knights, much of that project’s external mystery has, of course, fallen away. And 1 Time Mirage is a very public step forward for the pair. That early sense of secrecy has given way to a spirit of friendship and creative candor, to the doors of experimentation being thrown open by old pals thrilled by the prospect of testing new ideas.

Still, these eleven songs retain a core of intrigue and, indeed, mystery; each listen reveals yet another connection between infinite and interlocking pieces. To wit, Robert Beatty’s brilliant cover for 1 Time Mirage depicts a futuristic vehicle, being coolly steered with one hand into some great, mildly ominous unknown. That’s how these songs feel, too—confident conquests of the dark that unlock sounds and spaces you have yet to imagine.

At the early age of 16, Johnny Gr4ves started his career strong collaborating with Electronic powerhouse duo Pegboard Nerds on "Just Like That" which topped Billboard and iTunes Electronic charts. More opportunities came rushing in with the success of the song which put Johnny onto songwriting credits for ARMNHMR and the Polish Pop star Dawid Kwiatkowski. Collaborating on the album COUNTDOWN with Dawid and Konrad OldMoney won them a #1 album as well as "Album of the Year". Johnny Gr4ves' successful start only makes the next few steps of his career more promising.

Accessibility Info:
Unfortunately, the venue entrance is up a flights of stairs. Please respect the space and your fellow show attendees. If you have any questions regarding accessibility, please send us a DM.