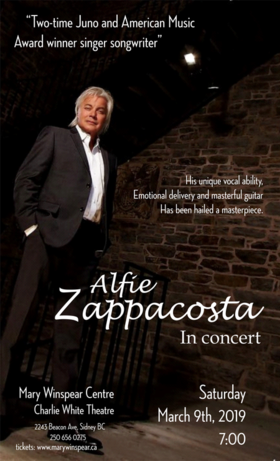 Music: Jazz / Blues, Pop / Rock / Indie
Alfie Zappacosta is undeniably one of Canada’s premier singer/songwriters and performers, with chart topping hits and a recording and acting career that has spanned over 40 years.
In 1988 he was awarded Junos for “Album of the Year”, “Most Promising Artist”, and American Music Award for “Most Popular Album of the Year” as well as named the Canadian Publisher’s Music Association’s “Best Rock Star”.
His songs, “Start Again” and Nothing Can stand In Your Way” became staples on Canadian contemporary radio, and Zappacosta became a Rock Star personified. Alfie penned and sang. “Overload” exclusively for the multiplatinum soundtrack “Dirty Dancing”.
This year a street in Toronto was named Zappacosta Drive in honour of his contribution to the music world. Now still going strong he performs impressive renditions of his life’s work. His new live Album “Strings Attached” was released this year - a blend of acoustic, jazz and pop music.
Zappacosta’s distinctive baritone voice, masterful guitar playing, and sophisticated stylings render his live performances spellbinding. From the first notes of a song, he sets the mood and tone for an exceptional evening.
Link
https://youtu.be/5rHomdCRPiM