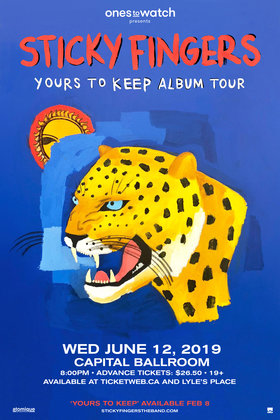 Music: Pop / Rock / Indie, Reggae / Ska / Dub
The love child of a fling between Manchester Rock and Kingston Dub and raised on Rock and Roll, luring listeners with a salivating caress of the soul. Australia’s Sticky Fingers will be unleashing their fourth LP, Yours To Keep, on February 08 (out through Sureshaker) with an album tour to follow. Jetting over to the North American East Coast in March, then Europe & UK in April/May and then back to North America for a West Coast run in June 2019 (dates below).

More recently in the live realm, Sticky Fingers have completed a sold out world tour with stops in Auckland, Mexico, Los Angeles, New York, London, Amsterdam, Berlin and Indonesia. They’ve performed at renowned international festivals such as Rocking the Daisies (South Africa), In the Lights (South Africa), Bluesfest (AUS), Caliroots Fest (US) and The Great Escape (UK). With a plethora of sold-out headline shows over the world including USA, Canada, Europe, UK and New Zealand multiple times, they’ve earned themselves a household name on the strength of their seductive style and high- voltage live shows.

Together, Dylan Frost (vocals/guitar), Seamus Coyle (lead guitar), Paddy Cornwall (bass), Beaker Best (drums), and Freddy Crabs, (keys), are undeniable: their latest album Westway (The Glitter and the Slums) debuted #1 on the ARIA Album Charts, their sophomore album Land of Pleasure debuted at #1 on AIR Independent Charts, and they’ve racked up an arsenal of viral hits (“How To Fly” is sitting on 21 million YouTube views, “Australia Street” has 14 million). They wrapped up 2018 being the 4th most streamed Australian Artist on Spotify alongside Vance Joy and Sia.

STI FI, soars from strength to strength on the back of a workhorse ethic. Such is the way legends are born. They have sold out second and third dates on their Australian tours time and time again, including selling out a national tour without even announcing it (and then they did it AGAIN). After years of non-stop touring, the endless road left the band emotionally and physically exhausted. Almost 2 years since their last album, Sticky Fingers are back.

Yours To Keep is their 4th upcoming album, recorded in early 2018 at Rocking Horse Studios in Byron Bay. Engineered by Nicholas Wilson and Produced by their long time collaborator Dann Hume, the album features singles, Kick On, Cool & Calm and Loose Ends. An album reflecting on the last few years and dedicated to their fans, friends and family. It’s a soundtrack to a sunbathed kick-on. This is “Yours To Keep”.