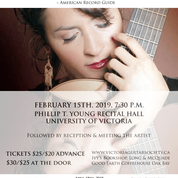 Music: Classical
"Hailed by the critics as “The guitar guru” (E-Veritas. University of Miami) “the powerful and intense style of Iliana Matos” (Classical Guitar Magazine) has made possible an extraordinary career. After hearing Iliana Matos perform in Caracas, the legendary Alirio Díaz wrote: “Her refined technique, always put at the service of a personal musicality, is what more can surprise in the guitar art of the Cuban and Latin American virtuosa Iliana Matos. All this, added to other exquisite qualities, has made her an appealing personality within our world of music”. Iliana Matos graduated from the National School of Art in Havana; she earned a Bachelor of Music from the Superior Institute of Havana, and received a Special Diploma given to the most outstanding graduate for her artistic creative work. She continued her studies at the Royal Music Conservatory of Madrid and graduated with a Master of Music Degree from de Extremadura University.

Her highly acclaimed GSP CD “Angels in The Street” has earned universal acclaim from critics, placing her among the elite of today’s classical guitarists: “Her name deserves to go down in guitar history as one of the great players of our time.” (Classical Guitar Magazine); “a match-made-in-heaven recording that is about as perfect as guitar records get… she simply, radiantly shines, a virtuoso in service to the music” (American Record Guide); “she has sufficient of all credentials necessary to take her place in the annals of guitar as one of its truly gifted and outstanding exponents.” (Musicweb-international.com), “it’s impossible while listening to ‘Angels’ to believe that her name will not someday ring the same peal of recognition as does Bream and Williams” (Minor7th.com).