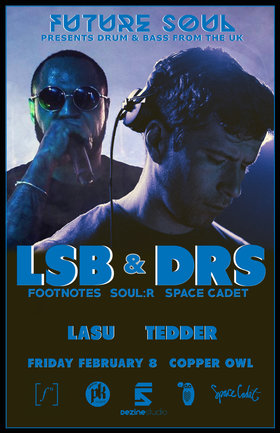 Music: Electronic / DJ
Future Soul proudly presents these two heavyweights all the way from the UK. What an experience it will be to see both LSB & DRS play our intimate venue. This is a big show, get your tickets now to avoid disappointment! LASU & TEDDER on the warm up.

PK SOUND in Full Effect
DEZINE on the Visuals

LSB’s first forays into Drum & Bass came in the early 2000’s as the co-promoter of the hugely successful ‘Bounce’ nights in Norwich. Cutting his teeth behind the decks as one of the resident DJ’s, he had already turned his hand to production by the time the team behind Bounce called it a day in 2007. His first productions surfaced on the now defunct imprints Bingo Beats (run by the legendary DJ Zinc) & Deep Soul Music in 2007-08. After a small hiatus spent honing his craft, he returned with fresh music in 2011 and his stock has been rising ever since.
‘All Of My Love’ / ‘Rolling Sideways’, released on BCee’s Spearhead Records, was the first of this new wave of productions and exhibited his new prowess in the studio and a more expressive, melodic sound that quickly became his trademark. Further releases on Spearhead quickly followed in the shape of the ‘Overthinking EP’, ‘The Hurting’ and more, as well as making a choice appearance on Artificial Intelligence’s Integral label with the hugely popular ‘Rotary Motion’ / ‘Serendipity’ 12” in collaboration with Technicolour & Komatic (now Technimatic of Shogun Audio).
By now, his blend of soulful musicality with dancefloor weight had won him a myriad of fans across the globe. Gigging across the UK and Europe to captivated audiences in 2014, he still found the time to remix ‘Serendipity’ for Integral, drop ‘XLRS’ on Shogun Audio as part of their 10 year compilation album as well as feature on Tokyo Prose’s hugely popular ‘Presence’ LP. A remix of London Elektricity’s ‘Vapour Trails’ followed as part of the Hospitality 2015 album before he featured on the sophomore DRS album ‘Mid Mic Crisis’.
‘The View’ was the stand-out track from a stand-out album, with his delicate instrumentation & arrangement perfectly complimenting Tyler Daley’s haunting vocals and DRS’ insightful lyricism. Having already impressed Soul:r boss Marcus Intalex with his music, a solo EP for the label came in the shape of volume 3 of the popular ‘Four:Fit’ series. The EP’s 4 tracks found their way into the sets of countless A-List Dj’s and showed a diversity in style, approach and a confidence gained from the ease with which his music fitted into the discography of one of the most respected labels in D&B.
Now working on follow up projects for Soul:r, producing remixes for some of the biggest labels in bass music, in addition to playing an ever expanding number of DJ dates across the world, the man simply known as Beavon to his friends is assured of his status as one of the brightest up & coming talents in Drum & Bass.
--------------------------------------
DRS - Space Cadet | soul:r | Signature - Manchester
https://soundcloud.com/mcdrs
https://www.facebook.com/Delrokski/

As a solo artist DRS is two albums, an EP and countless features into his trajectory. His music is the sound of an artist becoming a master of his domain, a weary look at life underpinned by honesty and great writing.
As a creative he works across different disciplines: music, film and art.
His success as an artist boils down to his refusal to speak on anything other than his truths, something that listeners can identify with, this is highlighted by three award wins at the Drum & Bass awards: Best MC, Best Vocalist and he featured on the Still Standing Remix which was awarded best remix. He is the go-to host for some of the finest that electronic music has to offer, from Calibre to Toddla T.
2017 is about furthering the message via two new outlets; Summit and The Awkward Music Group, stay tuned for more news on both of those soon.
--------------------------------------
LASU - Soul Deep | High Tea | Future Soul | Hydration
https://soundcloud.com/iamlasu
--------------------------------------
TEDDER - Future Soul | Fokuz | Elm Imprint | Rubik | Influenza | Soul Rebel
https://soundcloud.com/djtedder