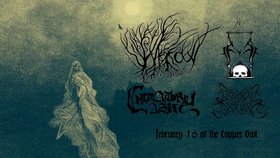 Music: Punk / Metal / Hardcore
Vancouver's Finite return to the Island for the first time since their performance at this past year's Vancouver Island Metal Festival. It is also the first time they're playing the island since the release of Derelict.
They will be supporting Harrow, who also haven't played locally since the festival, and who also have a new release in tow - A Fire in the Mountains.
Crematory Ash will be hitting the stage for the first time since May, and Liminal Shroud will be playing their first show ever.