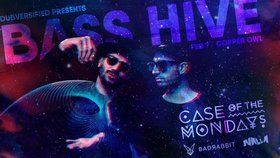 Music: Electronic / DJ
Dubversified Culture is about bringing the artistic community together through dub influenced music.

Why the Bass Hive? In the beehive superorganism all members are aiming for the same goal; ensuring the survival of the colony. The Bass Hive is a series of events that wants to bring the Victoria Bass community together to ensure the survival of our festival minds over the winter.

Dubversified Culture presents the First Bass Hive of 2019 !!! New season and new headliners. They are the king in Whistler and they just released their own track with DirtyBird Records.

Case of the Monday (Whistler, BC)
[Westwood Records / DirtyBird Records]

Case of the Mondays started off as a Raw House Music Night that turned into crazy weekly party in Whistler, Canada. With the massive success of the night, the two creators Joni T & La Dooda decided they had something special going on and joined forces. The two absorbed the name Case of the Mondays and hit the Studio releasing there first record “Cut the Shit” on Unknown Records, September 2016. This same party starting duo have come screaminginto 2017 with there new dance floor ready single “GLOW.” Already Being featured on Triple J and Stoney Roads, this record is destine to stay in the club charts for months! In May 2018 Case of the Mondays released there Debut EP on the Funk Hunters renowned Westwood Records featuring 5 Dance Floor ready tracks. Are you ready to Dance?Joni T & La Dooda would describe there sound as “Deep in Tone and Ghetto by Nature." Over the past two years they have played several Canadian Music Festivals, Pool Parties in Central America, Countless Clubs, Private events, and have opened up for many of their musical heroes and the best in the industry. Whether they are playing a party at the top of a mountain or at pool party next to the ocean, Case of the Mondays createsa Magical World of "High Energy Bass Driven House Music" where its okay to spill drinks, dance all night, and call in sick to work!

Bad Rabbit is Blackout x Nova Jade, a DJ Duo based in Victoria, BC that emerged after a meeting over tea, a few jam sessions, and a camping trip. They are spinning Bi-weekly on SUBFM and they are involved in many different projects in the Victorian electronic music scene.

With 21 years of combined experience, and their shared passion for music, bass and dance, Blackout and Nova Jade as Bad Rabbit are a duo on the rise, with the energy to match. Got Rabbit Food?

Have you catch one of Nalla's set? You should! With more thand 10 years of experience on the west coast DJ scene, he's been involved in many big shows as a sound tech, a curator, a opening act for a world famous DJ or a headliner at festivals. He also is a elder of Submersive Tribe who play a key role in Victoria Music scene for managing the most up and coming musical studio of Van Isle.

He venture in the 128 BPM and he likes his Bassline thick & Gritty.