The Mary Winspear Centre Sidney BC

The Mary Winspear Centre (All Ages)

Described by the CBC as the "hottest" guitar ensemble in Canada, MG3 has quickly established itself as a force to be reckoned with, as well as an interactive force in various musical forms. For over 20 years, the trio's virtuosity, rigour, creativity and impressive stage presence – where humour and interacting with the public go hand in hand – have been winning over audiences around the world. The trio, composed of guitarists Sébastien Dufour, Glenn Lévesque and Marc Morin, has given hundreds of concerts in some of the most prestigious venues across North America, Europe, New Zealand and Australia, including the legendary Concertgebouw in Amsterdam, the Rundetårnet in Copenhagen and the BB King Blues Club in New York City.
Winner of the 2011 Opus Award for "concert of the year" in the Jazz & World Music category, MG3 has released six albums, including Der Prinz on Analekta label, which earned him a nomination at ADISQ 2014 for the "Instrumental Album" of the year. In January 2017, the trio launched its 7th album « Danzas » at the Théâtre Outremont in Montreal, which pays tribute to the great composers of Spanish music in the likes of Paco de Lucia and Manuel de Falla. This CD was also nominated for the album of the year at the ADISQ Gala 2017.
Throughout the years, the trio has collaborated and shared the stage with world-renowned ensembles and artists, such as the Orchestre symphonique de Québec, Jorane, Solorazaf and Don Ross. Their most memorable collaboration to date was, without a doubt, with the California Guitar Trio (CGT), when both ensembles joined forces to give an unforgettable concert, brilliantly performing some of the greatest rock classics from The Beatles, Radiohead, David Bowie, a few "spaghetti western" themes by Ennio Morricone, as well as some of their original compositions. Starting in the fall of 2010, the sextet has toured across Canada and the United States, performing in over 100 cities.
Artist website: https://www.mg3.ca/

ABOUT CARAVAN WORLD RHYTHMS
Caravan World Rhythms is a non-proﬁt BC-based organization founded in the year 2000 with the mandate to present a wide range of high-quality world music and dance performances featuring Canadian and international touring artists from diverse cultural backgrounds. Our events take place primarily in the Vancouver and Victoria regions, at a variety of venues, throughout the year. 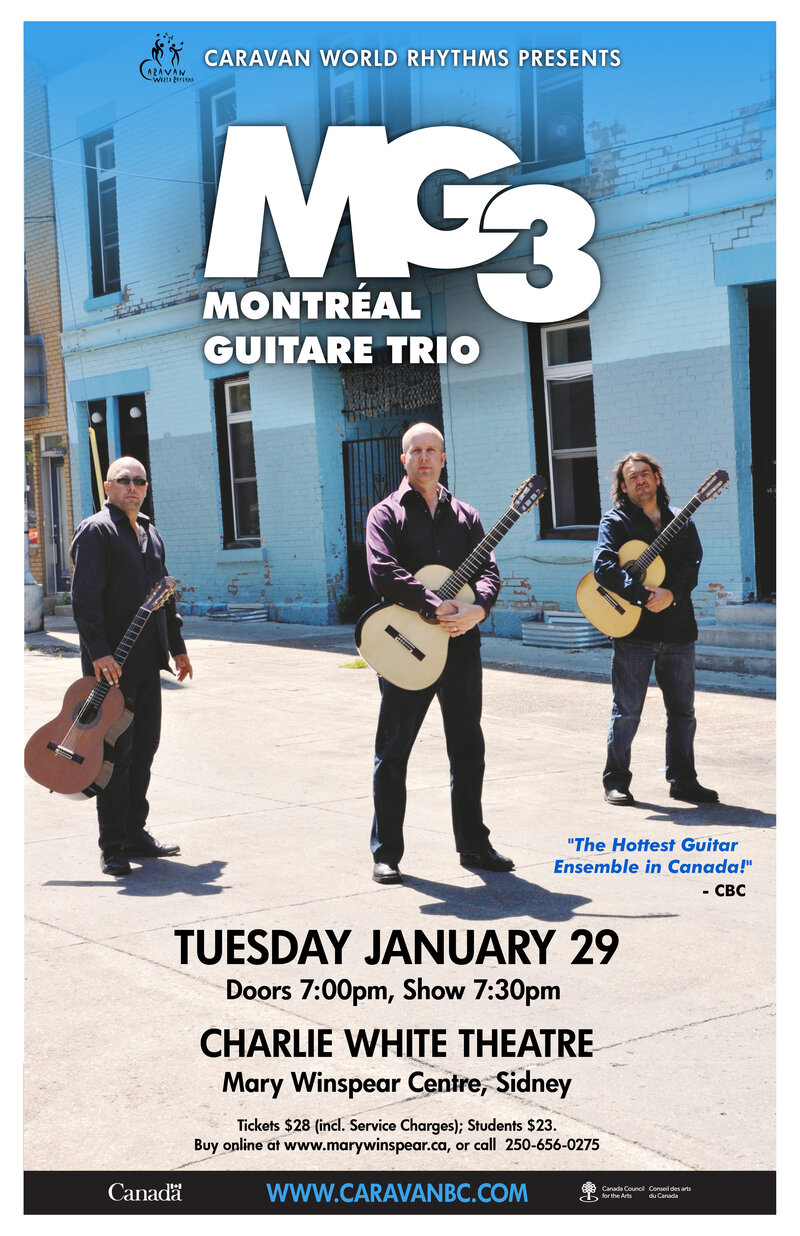