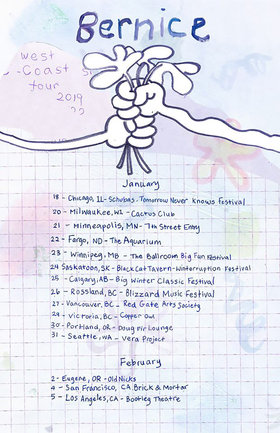 Music: Pop / Rock / Indie
Bernice (Arts & Crafts, Toronto)
~~~~~~~~~~~
"Puff, a 5-song EP, was released in June ‘17 to resounding critical acclaim from Pitchfork, NPR, Zane Lowe, and The Fader. Stereogum and Exclaim named the release as one of the 'Best EPs of 2017. Puff was produced by Grammy Award-winner Shawn
Everett (Alabama Shakes, Lucius) and Matt Smith (Owen Pallett). The release was supported on tours with Charlotte Day Wilson and The Weather Station.

Continuing their enigmatic exploration of pop, jazz, and R&B, Bernice's new album "Puff: In the air without a shape" attempted to mimic the playful intimacy of the band’s live show. The album was called “a monument to ephemerality” by the New York Times and received a long-list nomination for the prestigious Polaris Music Prize."

Supporting artists to be announced shortly

This Regular Occasion event takes place on Coast Salish territory, in particular the territory of the lekwungen and W̱SÁNEĆ peoples.