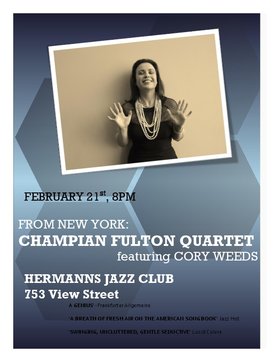 
Vocalist / pianist Champian Fulton has been called the most gifted singer of her generation. A mainstay on the vibrant New York Jazz scene, she has performed with musical royalty such as Lou Donaldson, Frank Wess, Buster Williams, and Louis Hayes. From New York to Barcelona, Champian’s swinging style and charismatic performances have made her a guardian of the legacy of Jazz.

"Fulton’s voice is deep and resonant, her phrasing nuanced and stylized in the way of traditional jazz singers. But her persona is modern and upbeat" THE NEW YORK CITY JAZZ RECORD

“Fulton moves effortlessly and vividly from delight, to wistfulness, to wounded angst in a matter of seconds and makes it seem completely natural, the work of a deep and insightful individual and a rare force on both the keys and the mic.” NEW YORK MUSIC DAILY

A saxophonist with an expressive sound rooted in jazz tradition, Cory Weeds has released 14 recordings as a leader on Cellar Live, the label that he founded in 2000. His most recent release, Explosion, features Weeds fronting a 10-piece big band.