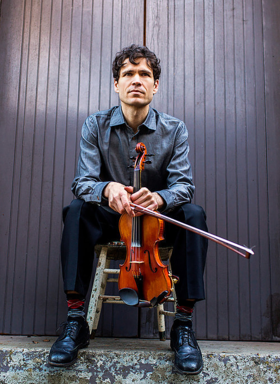 Music: Jazz / Blues
A veteran of the Canadian music scene and considered by some as an underground legend, violinist Richard Moody has delved into almost every style a string player can try.
​
Richard's musical interests lie mainly in improvisation, drawing from and combining the many styles and techniques he has learned in his extensive musical travels.
​
While still in his teens, Richard moved from his native Winnipeg to Montreal and joined the gypsy jazz group Swing Dynamique. Several years later, and after a classical music education at the University of Manitoba and the Conservatoire Nationale de Musique in Caen, France, he co-founded the critically acclaimed folk rock group Acoustically Inclined, garnering a huge national following.
​
Richard has performed and/or recorded with a variety of prominent artists, including Jane Siberry and Joel Fafard, and is currently also a member of the Juno nominated band The Bills.