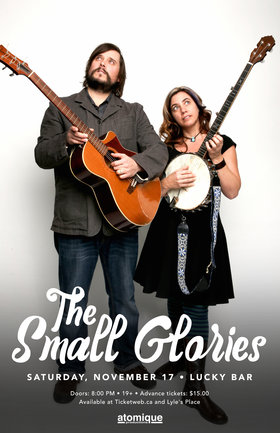 Straight out of the gate these two veteran singer/songwriters built an international buzz around their tight harmonies, emotional authenticity, explosive live performances and equally well-matched guitar prowess. Luft packs a mean banjo as well. Many know Cara as a founding member of country/folk sweethearts The Wailin’ Jennys. In this new project, it's clear that JD just might be her musical soul mate.

The Winnipeg Free Press asks, "can two singer-songwriters be better than one? Yes, emphatically, yes, if the two in question are Cara Luft and JD Edwards... It’s our loss they didn’t [join forces] sooner... It’s magic.” Fairport Convention drummer Dave Mattacks captures them perfectly: "Think The Civil Wars but less pretentious, with better songs and more guts." Americana UK writes, “some things just work together: the Lennon and McCartney syndrome – and to witness a performance by The Small Glories is rare opportunity to experience that indefinable quality that creates perfection...”

Their 2016 debut album “Wondrous Traveler” is steeped in classic song structure, delivering instantly appealing melodic Americana with first-rate playing. The album was nominated for two Canadian Folk Music Awards, found its way onto many critic’s Top 10 lists across North America and Europe, and the duo are finding themselves on stages from London to Philadelphia to Vancouver to Australia and beyond. TSG's sophomore album comes out in early 2019.