Hot on the heels of his induction in to the Canadian Music Hall of Fame alongsid...

Hot on the heels of his induction in to the Canadian Music Hall of Fame alongside his ex-bandmates in Barenaked Ladies, singer-songwriter Steven Page has announced the forthcoming release of the most forceful musical statement of his solo music career. Discipline: Heal Thyself, Pt. II, will be released on Friday, September 14, 2018 via Fresh Baked Goods / Warner Music Canada. Fans can pre-order/pre-save the album HERE.

Ahead of the album’s release, Steven has today launched the vitriolic first single, “White Noise,” a naked look at the current political discourse south of the 49th parallel. (see “White Noise” lyrics below). Listen to “White Noise” HERE.

“I grew up in a household where social justice was a fundamental value, and I always believed that it was a fundamental Canadian value as well as a central Jewish one,” says Page. “I’ve watched how the term has been twisted and perverted by the Right over the last several years in an effort to diminish the voices of reason.

Although I grew up politically aware, in a left-leaning household (which, in Canada, was not regarded as anything sinister until the mid-90s and beyond), it wasn’t until I discovered the politically-charged music coming from the UK in the 1970s (the Clash, The Jam) and 1980s during the Miner’s Strike and the Red Wedge movement (Billy Bragg, Style Council, Communards, etc) that I became excited by the power of music and activism. This song pays tribute to that music, and was written in the wake of last year’s events in Charlottesville. The open displays of racism and antisemitism, and the chants of “Jews Will Not Replace Us” made me grab my guitar and tell them I’d be more than glad to replace them.”

Recorded at Fresh baked Woods Studios just outside of Toronto and Vancouver’s Doghouse of Thunder Studio with longtime live bands Odds and The Original Six, and frequent collaborator Craig Northey, Discipline is Page’s fifth solo album and the spiritual follow-up to 2016’s Heal Thyself Pt. I: Instinct. Musically, the album tips its hat to many of Page’s influences including the aforementioned punk rock movement and David Byrne as well as a nod to the Bee Gees and the Zombies.
Physical tickets at: Lyles Place 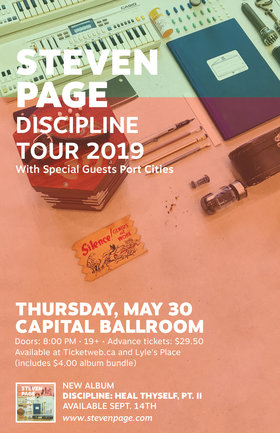