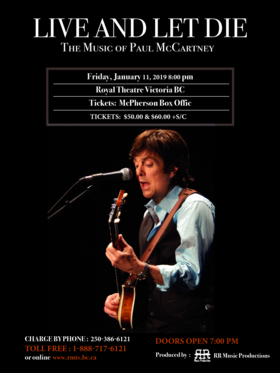 Singer and Recording artist, Tony Kishman is the creator and band leader of Live and Let Die The Music of Paul McCartney, a full multi media experience celebrating the music of Paul McCartney and features 4 multi-talented musicians.
Tony starred for six years in both national and international tours of Broadways Beatlemania and also performs in the international Symphonic Beatles production " Classical Mystery Tour "

He has been performing his award winning show to the most successful band of all time around the globe for over a decade; Bringing the music and magic of both the Beatles and Paul McCartney to a new generation.

A consumate musician and multi instrumentalist, Tony Kishman had previously performed. recorded and toured with the critically-acclaimed band Wishbone Ash. He has recorded his own music with both RCA and Mercury records.

He is proudly endorsed by Hofner