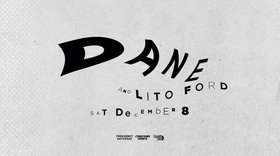 _DANE
https://www.residentadvisor.net/dj/dane
Dane hails from the icy Plaines of Canada’s North. Born and raised in the work hardy city of Edmonton, he grew up playing Shinny Hockey and driving a Zamboni in the local rinks. Naturally those cold nights on the ice led him directly to the warmth of the dance floor at a young age. From then on his life in Edmonton blossomed into being a part of a loving community, where he manned the local record shop and played his weekly residency at The Common for over half a lifetime. Now 32, Dane has relocated to Berlin with excitement for the cosmic future ahead.

Over the years, a deep love and adoration for Western Canada grew. Spending time out in Vancouver and Victoria, falling in love with some of the finest people around. With timely meetings of Westcoast disco OG’s Koosh & Eddie C, coupled with the support of The Common, Dane had the gentle nudge needed to start his label Common Edit. Starting out as a simple excuse to press a record, throw a party and have a time, it soon became one of Canada’s foremost edit imprints, specializing in 7” & 12” cuts for the floor and bedroom.

Love, records and dancing have always been Dane’s passion. It shows in his sets with maniacal hair flips, expressive dancing and belting out lyrics to every hard dug record in his crates. Obsessive collecting and practice have made Dane one of Canada’s favourite 4x4 contributors. Carrying on the message of love, unity and lust for music, that you can feel every time you share the dance floor with him. Whatever the mood, he’ll take you higher and higher and let you leave happy and fulfilled.