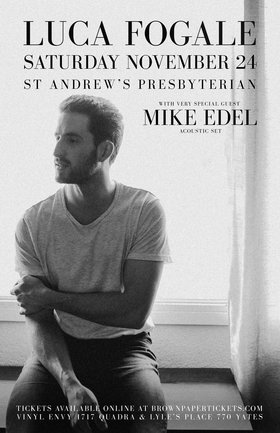 Music: Folk / Celtic / Latin / World, Pop / Rock / Indie
Luca Fogale returns to Victoria, backed up by his band 5 piece band in one of Victoria most beautiful venues. Opening the show is Mike Edel. This show is not to be missed!

I Don't Want To Lose You is the new single from Luca Fogale.

Lucas immense vocal talent is impossible to ignore, elevating songs rooted in the folk tradition to soulful hymns about the human condition.

Based in western Canada, Luca has played over 600 shows in the past three years as he has tirelessly honed his craft. These shows have become the stuff of legend for his loyal community of fans standing ovations and teary-eyes are uncommonly common when Luca sings.

Luca has also shared the stage with Serena Ryder, Hayden, Chad VanGaalen, John Mann (Spirit of the West), Frazey Ford, and Twin Bandit. His debut full-length album Safety has over 4 million cumulative streams across the major platforms, and his latest single I Dont Want to Lose You has been used on Greys Anatomy and NCIS: Los Angeles. http://www.lucafogale.com