Vinyl Envy is proud to present another live show in-store featuring the talented...

Vinyl Envy is proud to present another live show in-store featuring the talented:

Steph Macpherson (Victoria, BC)
Victoria’s Steph Macpherson’s debut folk-pop EP, “To You” showcased an ear for melody, and a knack for honest words and powerful lyricism that was dominated by acoustic guitars and rich harmonies. Her new album, “Bells & Whistles” picks up where “To You” left off, establishing Macpherson as one of Canada’s up-and-coming singer-songwriters.

She has performed at events such as Lilith Fair, CIMA/Canadian Blast in Los Angeles, Canadian Music Week, Rifflandia Festival, BreakOut West, Blue Sky Festival, SHOREfest, Pop Okanagan, 100.5FM The Peak Performance Project Top 20 and Main Stage of both Tall Tree Festival and the Legislature Lawns in Victoria for Canada Day. Her music can also be heard on many radio stations around Canada.

"Macpherson’s voice is clear, well-trained and hauntingly beautiful, and her vocal melodies are deadly infectious". - BC Musician Magazine

"The one thing that can be said about Steph Macpherson’s music with certitude is that, hands down, it is absolutely beautiful" - Canadian Music Blog

BoneHoof (Solo Set!) [Victoria, BC]
https://www.facebook.com/bonehoof/
Bonehoof (the pseudonym of singer-songwriter Chris Lloyd) has a sound and writing approach reflective of early exposure to both classic folk and blues music. Shaped by the likes of John Martyn, Richard Thompson and John Fahey, yet it's clear his influence and cross-genre appreciation for music runs deep and transcends many decades.

Throwing any effects out the window, he runs straight into an old tube amp with a ’59 Harmony Stratotone; a true companion that supports both his meandering finger-picking and hypnotic experiments with reverberation.

The Dylan Rysstad Band (Victoria, BC)
Dylan Rysstad is a singer/songwriter, multi-instrumentalist and producer currently living in Victoria, BC. Radio Silence, his 8th album for Sakamano Records, was released summer 2017 and features a who's-who of Victoria talent: Dylan Stone, Gord Light, Ray Mohr, and Evan Matthiesen.

Dylan has toured internationally as a member of Isotopes Punk Rock Baseball Club (EU tours 2016/2017), The Jolts, and Ramores (Ramones tribute); numerous national tours as a solo artist. Dylan began his career in music fronting The Badamps, a Vancouver-based pop punk outfit, that released four albums and an EP between 2002 and 2007. In 2004 he formed The Jolts and co-wrote material for two LPs an EP and two 7" singles between 2006 and 2011. Mandlebaums, Dylan's Seinfeld-themed punk outlet, has released two EPs and two full lengths (2015's Take it up a Notch!, and 2017's The Timeless Art of Seduction). 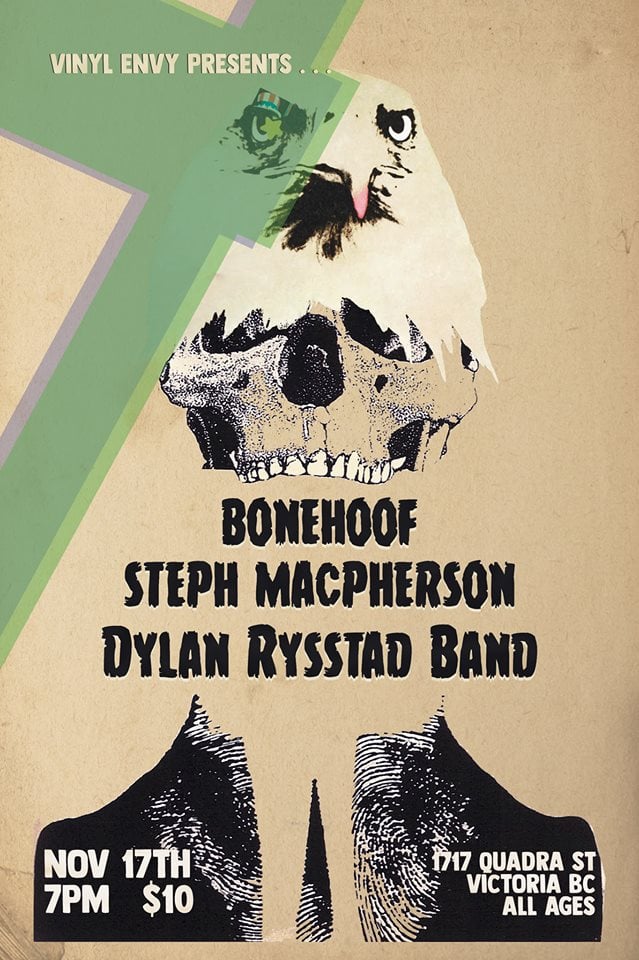