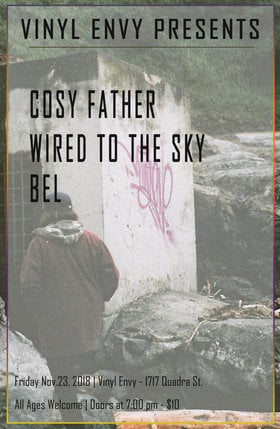 Cosy Father (Victoria, BC)
https://cosyfather.bandcamp.com
Cosy Father (Lizzie Petra) is a reclusive hillbilly with the voice of a young woman who writes, sings, records and weaves dreams in a small room in Victoria, BC. We've hosted them performing solo in the shop before and are very excited to host the latest iteration of Cosy Father, as a full-on country rock band!!

with
Wired To The Sky (Victoria, BC)
https://wiredtothesky.bandcamp.com/releases
Wired To The Sky is the ever-evolving solo project of Canadian artist, Dylan Perkons. After relocating from Montreal to the West Coast following the dissolution of his orchestral-folk project, Mind That Bird, Perkons began writing and performing new material, frequently collaborating with a rotating cast of Vancouver Island musicians. Though his dusty baritone remains at the front and center of the album, the dynamic arrangements help carry the listener through the songs. Swaying between colorful indie folk and eerie country-noir, the music compliments the earnest writing woven throughout the songs. Wired To The Sky is currently working on a follow-up release produced by Evening Hymns’ Jonas Bonnetta. The as-of-yet untitled effort is slated for an early 2019 release.

and
BEL (Victoria, BC)
BEL is the musical project and textural explorations of local singer-songwriter and multi-instrumentalist Dan Belgue~ His original songs will take you on a sonic journey, and tell you a tale (ala traditional folk music) simultaneously! Sometimes backed by a band and sometimes rocking the pedals in a unique shoegaze vibe, BEL's live performances aren't to be missed! Check out BEL's latest release Attics available on CD in limited quantity :)

All of these lovely folks will be filling your local record shop, Vinyl Envy with beautiful sounds! Come on by to show your support~

Cosy Father is a reclusive hillbilly with the voice of a young woman who writes, sings, records and weaves dreams in a small room in Victoria, BC. more info
Audio: Burn My Bones

BEL is a project by Dan Belgue, a musician and maker, residing in Victoria, BC. more info
Submit info on this show to our admins