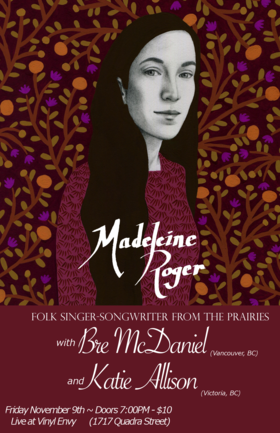 Madeleine Roger (Winnipeg, MB)
http://www.madeleineroger.com
Madeleine Roger is a contemporary folksinger from Winnipeg, Canada. While accompanying herself on acoustic guitar in multiple tunings, it is her artistry as a songwriter that can silence a room, uniting her captivating voice with vivid lyricism and a maturity beyond her years. A former thespian and a lifelong traveler, she creates songs with imaginative melodies and honesty that bares truths about being alive. Touring out west to support their new album 'Cottonwood', she will be stopping by your local record shop with

Bre McDaniel (Vancouver, BC)
http://bremcdaniel.com
Born in Vancouver, Bre McDaniel released her first EP with the completion of her Fine Arts degree at Emily Carr University. She handed in one of her final papers with a song she had recorded of similar theme, and like her drawings and paintings, she often shapes her music from serendipitous research or a local story that provokes her. Touring in support of her previous release, she has been found gracing the stages of The Vancouver Writers Festival, Khatsahlano Fest, odd cafes and living room carpets from here to PEI. Her past recordings have been described as having "an ethereal but intimate dream-folk sound," (The Georgia Straight) and her roots as a performer are close by.

and
Katie Allison Music (Victoria, BC)
Katie Allison is an original folk singer/song-writer newly based out of Victoria, BC. Katie weaves a unique story in their original songs and music that harken back to an earlier era of music. With flavours of folk, country and a little bit of jazziness, it arrives at a unique blend~