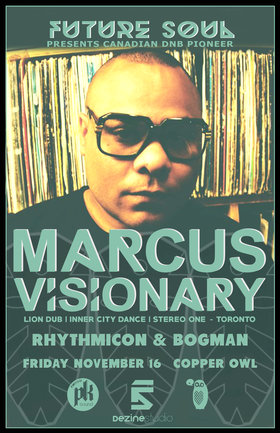 Music: Electronic / DJ
It's been too long since this man has played Victoria. He has been there from the beginning of the Canadian dnb scene and is still leading the way, the OG Toronto junglist - MARCUS VISIONARY.
The cagey veteran, RHYTHMICON, will fill the middle slot and BOGMAN will start the night with a special reggae set.

PK Sound in full effect
Dezine Studio on the Visuals

Marcus Visionary has been at the forefront of the Jungle DNB scene in Toronto Canada before it's very inception. He's often referred to as Canada's #1 DNB & Jungle export as well as being an ambassador for the ever evolving Jungle DNB sound worldwide. Marcus is one of the few artists out of North America who has built a strong foundation in the U.K & Europe as well as in the U.S. The journey started in 2004 when he was personally signed to the legendary Digital Soundboy family by Shy FX himself. Marcus joined the elite all star lineup alongside the likes of Benny Page, Breakage, Mark System, Stamina MC & B Traits. Since then he has travelled the world and played some of the biggest festivals representing his unique take on the Jungle DNB sound. Priding himself on upfront selection, clean mixing, musical versatility and a keen ability to read any crowd. Not to mention his collection of Dubplate specials which is something that has earned him fans the world over.

In his hometown Toronto, Marcus has been running the Prophecy on 89.5 FM for 20 Years alongside DJ Prime, Mr. Brown & Gremlinz. The program is North America's longest running Jungle DnB radio show and has been a integral part of the city's developing Jungle DNB music scene. In 2015 Marcus left the Prophecy in it's 20th year as he was asked to host his own exclusive radio show on the world famous Kool London (Kool F.M). You can catch Marcus the third Tuesday of every month from 2-4 EST 7pm-9pm GMT at http://www.koollondon.com.

After an immense run of critically-acclaimed success, leading to invitations to play at some of the biggest parties and festivals around the world. The last 3 years Marcus has been nominated as Best Jungle Producer at the We Love Jungle Awards, and being crowned Best Producer/DJ at the 2015 North American DnB Awards.

Hot on the heels of his massive LP Jungle to the World Vol. 1, 2016 followed with the extremely successful Jungle To The World Volume 2 & 3 with a stellar supporting cast, and the brand spanking new collaboration with NYC Junglist Liondub featuring select Dancehall, Reggae & Grime artists entitled ‘Rumble’. Moving forward into 2018 Marcus has decided to focus his studio attention on his label 'Inner City Dance' with best friend and legendary Toronto DJ Lush. Get ready for loads of great music distributed worldwide via Cygnus distribution!
With a full European tour scheduled for Sept/Oct 2018, don’t miss out on your chance to be part of it!
---------------
RHYTHMICON - sub|div | Hi-Q Sound System
https://soundcloud.com/rhythmicon
---------------
BOGMAN - The Mint
https://soundcloud.com/bogmanthebeast