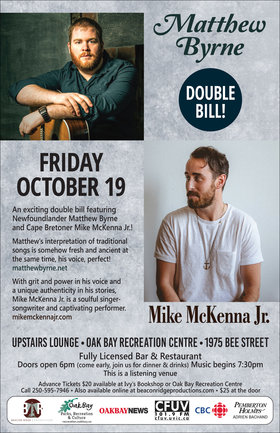 “Matt’s interpretation of traditional songs is somehow fresh and ancient at the same time. And his voice is friggin’ perfect.”— ALAN DOYLE (Great Big Sea)

​Born into a family of Newfoundland music makers, Matthew’s repertoire is heavily influenced by that unique musical lineage – the weaving of a great story with a beautiful melody – and he supports this tradition with powerful vocals, polished guitar work, and a presence that fills the room. His repertoire transcends time and place and his live performance reminds us how satisfying traditional songs can be when stripped down to their basic elements.
​
Matthew Byrne’s music has traveled well beyond the rugged shores of his Newfoundland home since his 2010 debut, Ballads. Touring as both a solo artist as well as singer with The Dardanelles, he has graced major festival stages worldwide. http://www.matthewbyrne.net

With grit and power in his voice and a unique authenticity in his stories, Mike McKenna Jr is a soulful singer-songwriter from Nova Scotia, who captivates listeners in his native Maritimes and around the North American folk community. Mike draws inspiration for his music from his early life growing up in Cape Breton, known as much for its rugged and picturesque landscape as for its rich cultural legacy that includes 500-years of colonial history and the accumulated oral traditions of Celtic, Mi'kmaq, and Acadian storytelling. The nostalgia of Atlantic Canada can be heard in the oil-workers ballad, "Die in the West" -- a song from his recent EP Travelin Man (2016), written in the traditional ballad style that idealizes the landscapes of home, but also the reality of struggling coal and steel industries on the East Coast.

Influenced by the two working class cultures, the strong historical relationship between Nova Scotia and New England is evident in Mike's music. His raspy, warm voice is reminiscent of a folky, Sweet Baby James era James Taylor, or the power of Ray Lamontagne, but his tales of tragic sea voyages and lost lovers are a throwback to the nautical-themed traditional songs of Nova Scotia, and a revival of this unique style made popular by Canadians like Stan Rogers and Gordon Lightfoot. http://www.mikemckennajr.com

The Upstairs Lounge is a licensed restaurant and bar, doors open at 6 pm for dinner service, the concert starts at 7:30 pm