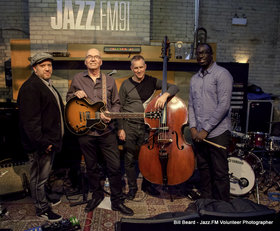 The Mike Downes Quartet has been performing since the mid-90s. The original quartet toured Canada and recorded their first album Forces to great acclaim. The Jazz Report stated “Bassist Mike Downes is one of Canada's immensely talented young giants." Forces was followed by Then and The Winds of Change (“Top 10 CDs of 2004” - JazzFM91). Mike formed a new trio/quartet in 2012 and released Ripple Effect which won a JUNO award in 2014. His next recording In the Current, featured compositions for an 11-piece chamber jazz ensemble, and his latest quartet recording Root Structure won a 2018 JUNO for Jazz Album of the Year.

“Mike has produced a beautiful new record that shows the great playing of these heavyweights but also Mike's tremendous compositions.” JAZZ.FM91 First Listen

“The music soars with melody and lush solos along with powerful rhythmic foundation”... Jazz versions of classical tunes are common, but this group’s interpretation of a Chopin’s Prelude shows how such a crossover should be done…” Keith Black, The Winnipeg Free Press