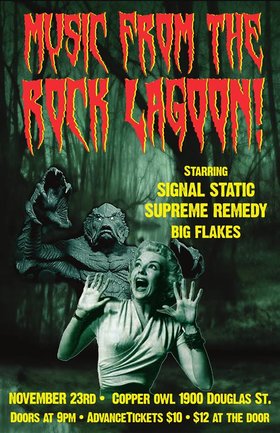 Signal Static is a labour of love produced by four dapper gentlemen in old-timey bowler hats doing what they can to make the world a better place one song at a time. That description may not be 100% accurate, but the truth is that this band is the work of four guys with different perspectives who share a love of music, a respect for humanity, a... more info

Supreme Remedy was born out of a mutual desire for crunchy guitars, cacophonous drums, and energetic live performances. Formed by Nico Turner (guitar/vocals), Gage Patenaude (drums), and Kevin Ishizaki(guitar/vocals), the trio was later joined by Dylan Parr(bass). Supreme Remedy is influenced from hard rock bands of the past and present; from Queen... more info

Big Flakes are an original Hard Rock band from Victoria BC. Playing groove based heavy, dirty, fuzzy goodness to get your head nodding. Come Rock with us! more info
Submit info on this show to our admins