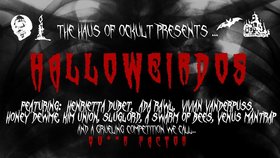 Time: The Copper Owl has a midnight curfew, so the show will start at 10pm SHARP. In order to get your money's worth, and see all the amazing performances we have lined up, be sure to get there early between 9-930 so you can get your drinks and get settled before witnessing the madness.

Trigger Warning: there will be gore, dramatics, horror, and occult themes.
There will also be zero tolerance for racism, transphobia, misogyny, or any other sort of bigotry in this space. Although we want to horrify you on stage, we want you to feel safe in our space so if anyone is making you feel uncomfortable, come ask any of us involved and we will promptly remove them.

LAND ACKNOWLEDGEMENT: We, as a group, would like to acknowledge with respect the Lkwungen-speaking peoples on whose traditional territory Victoria/Copper Owl stands and the Songhees, Esquimalt and WSÁNEĆ peoples whose historical relationships with the land continue to this day. It is important to know where you stand, and who we must give thanks to.