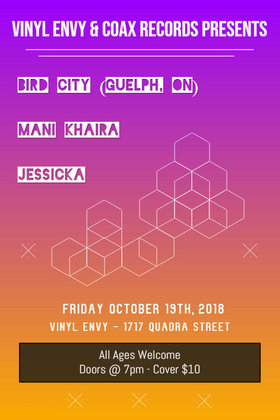 Bird City (Guelph, ON)
http://birdcity.bandcamp.com/
For nearly two decades, singer/songwriter Jenny Mitchell has been regarded as one of the most original voices within the Canadian indie music scene, and her latest project, Bird City, is her most personal yet.

As a beloved fixture of the music community in and around Guelph, Ontario, Mitchell has been a member of the Barmitzvah Brothers, the Burning Hell, Richard Laviolette and the Oil Spills, as well as performing under her solo alter ego Jenny Omnichord. Bird City is in many ways an evolution of the last concept, with Mitchell trading her Omnichord for the banjo and tenor guitar. Focusing on these instruments finally allowed Mitchell’s songwriting talents to fully blossom, and the exposed and poetic songs of paranoia, heartbreak and self-examination on Winnowing, the debut Bird City album, encapsulate the last 15 years of Mitchell’s life.

with
Mani Khaira (Vancouver, BC)
http://www.manikhaira.com
Mani Khaira is a Canadian singer/songwriter who composes on piano. His performances are powerful and captivating, don't miss this one! Mani has opened and shared stages with John Mayer, Dan Mangan, Mother Mother, Hannah Georgas, 54-40, Adaline, & Lukas Rossi.
His album "Between Pure Love & Thunder Bolts" has allowed him to tour parts of Canada, USA, and Europe.

and
Jessicka (Vancouver, BC)
http://smarturl.it/JessickaHappyPlace
Light Organ Records Indie Pop / Singer Songwriter Jessicka is fresh off the release of their brand new EP 'Happy Place' (which you can listen to above!), will be stopping into your local record shop to serenade us all, Victoria!

Mani was born and raised in Vancouver, Canada. Daily devotion and perseverance in his early teens led him to develop the sound of a professionally trained pianist and vocalist. Throughout high school Mani participated in numerous music arts programs. His teachers and peers praised his musical strength and suggested he take his music to the next... more info
Submit info on this show to our admins