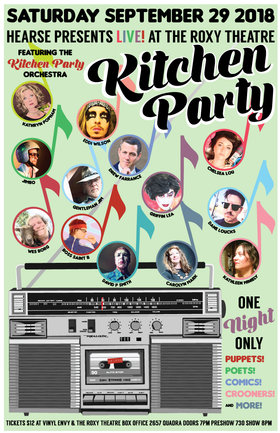 Music: Country / Bluegrass / Rockabilly, Electronic / DJ, Folk / Celtic / Latin / World, Pop / Rock / Indie Theatre:
What does a mid-level local talent musical group like Hearse do when presented with an opportunity to put on a show at the venerable Roxy Theatre? Why, they gather all their local friends (and foes!) and throw a Kitchen Party!

Inspired by the glitzy, and often bizarrely hilarious, 1970’s era variety show specials in the vein of Sonny and Cher and Donnie and Marie, local power couple McLaughlin and Walker have concocted a night of music, comedy, performance, and mayhem featuring a wide ranging roster of Victoria talent and trouble, and of course featuring some of their own greatest hits!

Featuring special audio appearances of the actual DJs of KSQM Radio 91.5 FM from Sequim, Washington! This is by far the most outlandish event Hearse or its members have ever produced or participated in. Yes, more outlandish than Grayson’s Drink-o Bingo Night or J’s UNO Fest performances! Hyperbolically more outlandish than their J and Grayson Ruin Xmas!

It is with sincerely motivated self-interest that Hearse invites those from all walks of life to share in that most intimate space at the heart of the home, surrounded by friends, songs, and laughter, alcoholic beverages available at the Roxy Concession, fond memories of past visits, and vain assumptions of future success.

A hearse is the vehicle which conveys each of us to our final resting place. The word might evoke thoughts of cars and trucks driving us to our graves or the horse cart leading up to the pyre. To the hearse's padding and curtains and carving go the job of easing the passage, for the spectators in equal if not greater measure even so than for the... more info