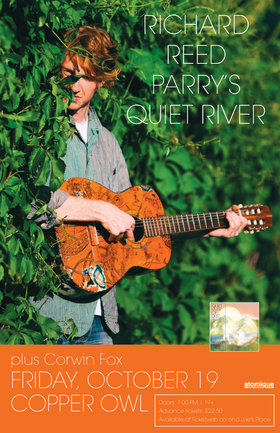 Music: Folk / Celtic / Latin / World, Funk / R&B, Jazz / Blues, Pop / Rock / Indie
A man travelling in a foreign land wanders through a forest of ghosts, who sing his past back to him. A rainstorm that starts and never ends. A boy dissolves into a body of water. These images inspire music that tells the story of two spheres: in one, an embodied experience of the physical world; in the other, something disembodied, dissolved and oceanic. Japanese folk myths, death poems and British folk music are tributaries flowing into a river of late-20th century avant-garde composition and traditional songcraft, written and performed by a member of a Grammy-winning rock band. This is a meditative, widescreen musical experience with Beach Boy harmonies and a hypnotic pulse. Layered songs that move in a linear fashion, following a current rather than circular composition. This is Richard Reed Parry’s Quiet River of Dust.Being released as two volumes, Quiet River of Dust Vol. 1 will be available on the start of the autumn equinox, September 21 2018. Quiet River of Dust Vol. 2 is coming out next year on the spring equinox 2019.

Long before he joined Montreal’s Arcade Fire in 2003, Parry grew up in a thriving folk music community in Toronto, where house parties were full of singing, where weekly gatherings featured dances of the British Isles, where all the progeny were routinely corralled into singing on popular children’s albums. While a student of electroacoustic music and contemporary dance in university, he formed the instrumental ensemble Bell Orchestre, who have released three albums, with another expected soon. In 2014, he released an album of biologically inspired compositions, Music for Heart and Breath, on the prestigious Deutsche Grammophon classical label.

Quiet River of Dust has been slowly gestating for the last decade, in many ways a necessary respite from Parry’s other gigs. Creating this music grew into a meditative practice. “I’m lousy at sitting still and being nothing,” he says. “But being out in the natural world or being immersed in music is the meditation for me. That’s the heart of this record: the experience of transcending the place that you’re in, getting lost in the feeling of where you end and where the world begins, in a dreamlike world of music and thought.” It is music meant to be absorbed in a setting devoid of other distractions, not shuffled into your streaming playlist—a tall demand these days but one worth the time.

The genesis of these songs came after Arcade Fire’s first tour of Japan in February 2008. Parry stayed on for weeks after the last show, heading to a monastery for some solace in “the biggest silence you’ve ever heard.” One day he was walking alone in a massive, snow-covered cedar forest when he heard distant voices, voices that sounded a lot like his father’s folk group back in Toronto, Friends of Fiddlers Green. (Parry was 18 when his father died in 1995.) “There was no reason for something to sound like full-throated, British-Isle folk singing there,” he recalls. “I walked and walked but I could never get closer to where the music was coming from.” The ghostly experience inspired the song “On the Ground,” which in turn inspired the rest of the song cycle. When it came time to record “On the Ground,” he enlisted his father’s former colleagues on concertina, Northumbrian pipes and fiddle.

More material began to flow, including one song on Vol. 1called “River of Death” and another about a small boy who disappears into the ocean while his parents are sleeping on the beach. On a return trip to Japan years later, Parry was on a hike by a hot-spring river when he saw a sign directing travelersto a “River of Death” (“Sai No Kawara”). He learned that it was a pre-Buddhist mythological concept of a place where parents go to mourn dead children, a body of water understood to be a liminal space between life and an afterlife.

Coming from the nation’s capital to settle in Victoria, Corwin Fox is a budding and innovative musician that fuses elements of folk, bluegrass and hip hop into his musical creations. Fox has created his own evolving style of folk music that seems best classified as “neo-folk.” Some of his influences include Bob Dylan, Bob Marley, Ron Sexsmith... more info
Submit info on this show to our admins