Sold Out - Yukon Blonde, The Zolas

“Be the reference.” That’s the mantra Yukon Blonde tacked up on the studio wall during the sessions for their fourth album, Critical Hit, and it emboldened them to rip up the indie rock playbook and embrace a synth-dazzled new sound that’s easy to love but difficult to pigeonhole. Now a decade into their career, Yukon Blonde are following no one except themselves.

Critical Hit began at a literal crossroads: after a tour, singer-guitarist Jeffrey Innes flew to Madrid to be with the woman he had met on tour in Spain, while his bandmates James Younger (bass), Brandon Scott (guitar), Rebecca Gray (keyboards) and Graham Jones (drums) headed back home to Vancouver.

This kicked off an artistic free-for-all, as Jeffrey spent the better part of the next year and a half wandering Madrid, penning lyrics in art galleries and chronicling the rise and fall of his relationship. “Everybody in Madrid was so inspirational,” Jeffrey remembers. “There are folk singers on the street and everybody believes they’re an artist. Being there, the pressure was off for writing music. I didn’t feel like I was writing for anything — I was just happy and inspired to make music.”

James also visited Spain — he initially stayed in a haunted 15th-century farmhouse across from Gibraltar, and then he joined Jeffrey in Madrid. Together, they worked on songs that were unabashedly pop, but without clear sonic reference points. Disco beats mingled with achingly nostalgic keyboard tones, while bittersweet breakup lyrics were sung in euphoric harmony.

“We would be at a cafe in Madrid, smoking and drinking beers, listening to demos and deciding what songs were going to go on the record,” James reflects. “Nothing was different except the location was completely absurd and amazing.”

The band reconvened on Canada’s West Coast, in a house on Galiano Island where they laid down the initial demo tracks, many of which ended up on the final record. They then took these tracks to Toronto with producer Thomas D'Arcy (Hannah Georgas, July Talk, The Sheepdogs) and captured two songs in Vancouver with Steve Bays (Hot Hot Heat, Mounties). The tracks were mixed by super-producer Tony Hoffer (Beck, M83, Phoenix).

The resulting 13 tracks push the envelope of 2015’s On Blonde even further, doubling down on that album’s electro-pop influences while still retaining the five-piece’s live spontaneity. Pop anthems like “Crazy” and “Summer in July” channel romantic longing via sublimely twinkling synths, while James takes the spotlight for the soulful falsetto vocals of “Cry,” and Brandon’s mournful “Dear Nancy” is laden with organic strings. “The Bluffs” and “Feeling Digital” are full-blown dance bangers that are guaranteed to explode during sweat-drenched shows. Although the band had written several straightforward radio singles during the sessions, these were left on the cutting room floor in favour of richer and melodically denser material. For the first time, Jeffrey shares frontman duties, with James and Brandon each singing two songs.

Anyone who caught on to the slow-burn success of 2012’s desolately hook-laden Ancient Mars could sense that something in The Zolas was threatening to bubble over, and after a year of recording, 2015’s Swooner (Light Organ Records) shows an alternative pop collaboration at the top of their creative game. Original members Tom Dobrzanski and Zach Gray have been joined by another longtime duo Cody Hiles and DJ Abell and this is the first album they’ve completely self-produced at Dobrzanski’s Monarch Studios in Vancouver.

Swooner marks a major departure from both the cabaret rock of 2009’s Tic Toc Tic and the atmospheric minimalism of Ancient Mars. This time around the band dove headlong into vibrant, experimental pop, stirring modern production into the influences that surrounded them as kids growing up in the ‘90s.

“This is the most ‘us’ of anything we've done,” Zach observes. “It’s fun to be in an era of music where people are ready to appreciate messed-up combinations of influences, and we had a good time pushing that.” Even just in the rhythm section you can hear these mispaired influences crop up in unexpected places. Drums that revolve from Queens of the Stone Age to Dr. Dre, bass textures evoking The Pixies or Kraftwerk. Instrumentally the album features flashes of grungy hard-panned guitars, Prince-like synth flourishes, eurodance vocal samples, watery electric pianos and arpeggiators, all of which feel shockingly comfortable in their new homes.

Swooner moves on from Ancient Mars’ lost love and nostalgia into a cross-section of conversations between a generation of friends about life in 2015; the balancing act we all reckon with between fun and dread. “This album is about how fucked up it feels to step out for a cigarette and a quiet moment at a party, read about disease and climate catastrophe on your phone, finish your cigarette and go back in to dance,” says Zach. “Songs about pre-drinking in your apartment, party drugs in Europe, political arson, jerking off to internet porn, pure love in a group of friends, being single and how great it is, being single and how much it sucks, finally realizing what you want to fight for and then getting distracted. It's the realest, most fun album we've ever made by far.”
Physical tickets at: Lyles Place

from Kelowna BC
Available for Shows/Gigs 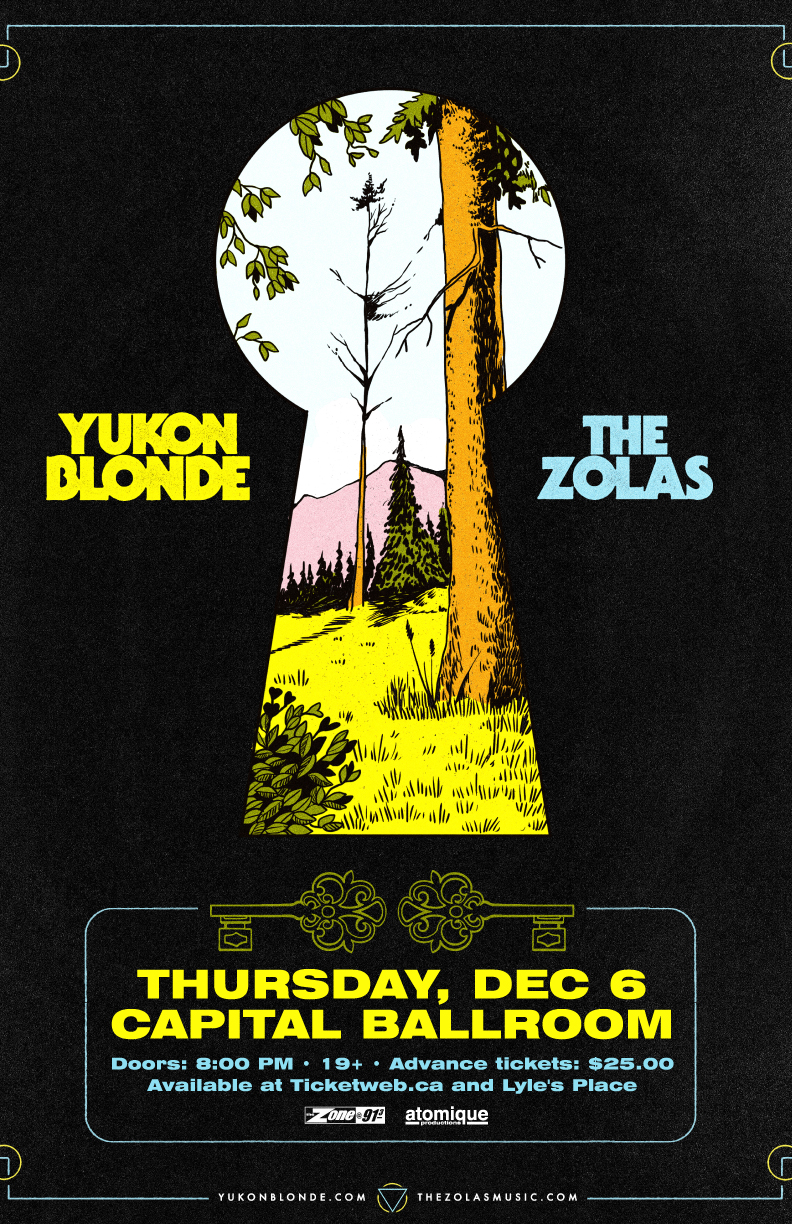