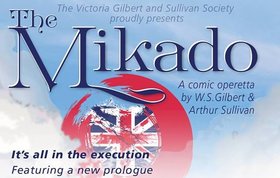 Music: Theatre:
Gilbert’s dry wit and Sullivan’s sweeping orchestrations are in top form in The Mikado, making the operetta one of the most popular in the repertoire. Set in a fictional Japanese town, the very-British musical comedy lampoons English society of the 1880s. The action follows a wandering minstrel on the run from an elderly woman he’s betrothed to. He’s in pursuit of the love of his life, who is unfortunately engaged to be married to the Lord High Executioner.

Victoria Gilbert & Sullivan Society’s all-new production includes the entire libretto of the original plus an additional scene—a prologue—with revised performance practices that avoid the parodies of Japanese fashion and culture that have created controversy for many years. Developed by the New York Gilbert & Sullivan Players in collaboration with the Japanese-American theatre community, the Prologue and performance practices serve as an example of a cooperative effort to promote diversity, equity and inclusive practice with classic works of art.