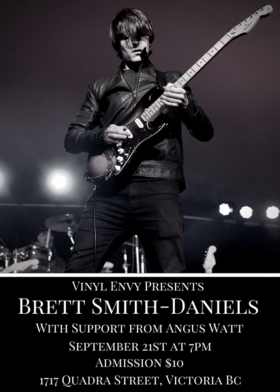 Brett Smith-Daniels (Victoria, BC)
http://www.brettsmithdaniels.com
British singer-guitarist Brett Smith-Daniels has performed on stage with Mick Taylor of The Rolling Stones, toured North America and the UK, and been featured on CBC’S Dragons Den, as well as conducting interviews for BBC Radio 1, and The Independent! He will be performing with a solid blues rock trio at your local record shop! Don't miss out -