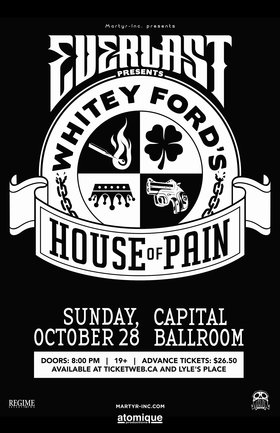 Music: Hip Hop / Rap, Pop / Rock / Indie
You can call him Everlast, Whitey Ford or even Erik Francis Schrody, but by any name, this singer-songwriter-rap legend’s remarkable music career has seen him reinvent himself several times over. From his first solo album, Forever Everlasting, under the auspices of Ice-T’s Rhyme Syndicate when he was barely out of his teens, to the “Jump Around” success with House of Pain, the multi-platinum Whitey Ford Sings the Blues (and its genre-bending hit single, “What It’s Like) and his Grammy-winning contribution to Carlos Santana’s Supernatural album (“Put Your Lights On”), Everlast has defied the naysayers. Along the way, he has forged a groundbreaking merger of hip-hop, rock, folk, funk and R&B, influencing everyone from Kid Rock and Colt Ford to acolytes like Yelawolf, JellyRoll and Lil Wyte, even if he’s too modest to say it himself.

Everlast’s newest album, Whitey Ford’s House of Pain, once again on his own indie Martyr-Inc label, is his seventh solo studio effort overall, and first since 2011’s Songs of the Ungrateful Living (The Life Acoustic, re-recorded solo guitar versions of previously released songs, came out in 2013). The 12-track release offers an eclectic stylistic sampling from throughout Everlast’s nearly-three-decade-long journey.