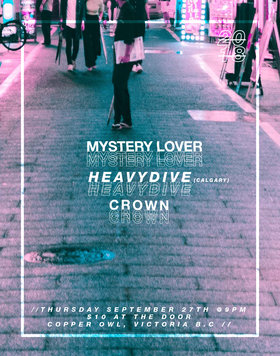 Formed just one year ago, Victoria Indie Rock/Mystic Emo band Mystery Lover have already established themselves as a promising new act on the local music scene, playing 20+ shows at almost every live music venue in town, and on a BC tour this past summer. Their music calls on a diverse array of influences such as Death Cab for Cutie, Mount Eerie, Bon Iver, Japandroids and the Hotelier and is informed by sonic and poetic explorations of Eros/romance, archetypal symbolism and myth, our local urban and natural spaces and an oceanside view of churning emotional waters. They have recently finished recording their debut LP at Fat Dad studios, to be released sometime in late 2018/early 2019.

Based in Calgary, Alberta, Heavydive is a three-piece rock band that mixes post-punk rhythms and shoegaze soundscapes with dreary, yet angelic, vocals reminiscent of Ian Curtis, Morrissey, and Robert Smith. Inspired by the turmoils of mental illness, escaping emotional abuse, and the fear of failure, their work soars and crashes with sonic intensity that brims with melancholy, uncertainty and hope.

A band comprised of three friends playing songs about life and love.

other sites: | myspace
CROWN formed in May of 2010, and has since risen quickly through the ranks to become one of Vancouver's hottest acts.CROWN's musical selection crosses decades, borders, and genres – blending contemporary rock with classical taste to provide a truly unique sound. Unlike bands with simply one lead singer or front-man, CROWN boasts 4 singers, each w... more info
Submit info on this show to our admins