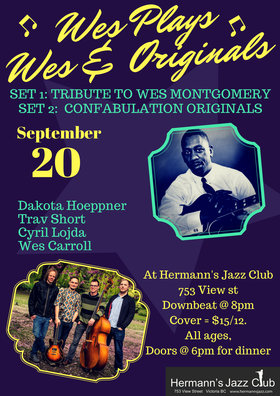 Set #1 is a tribute to the joyous music of Wes Montgomery! Expect to hear his well know tunes like West Coast Blues and Road Song along with some of his hidden gems.

Set #2 will feature the Wes Carroll Confabulation's original music. They have written new tunes since the release of their debut album in June.

The Wes Carroll Confabulation walks the tight-rope, balancing detailed arrangements with the power of spontaneity. Since early 2015, they have honed their unique blend: stretching out into a world of hip-hop grooves, soul, and electricity, while not losing their footing in jazz. The Confab recently released their debut album ‘Off Empire,’.