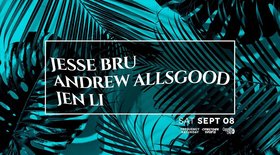 Jesse Bru (Vancouver) Heart To Heart, PIFF Records
https://soundcloud.com/jesse-bru
Influenced by early 90s hip-hop’s use of samples, and his own experiences as an MC, DJ, sound designer and audio engineer, Bru’s sample-heavy music production mixes diverse sounds pulled from found internet videos into deep, mid-tempo house tracks. His sounds reference and pay homage to older traditions in music but come skillfully into their own as soulful tracks. He released his debut album, MidCity (Audio Parallax), in 2012, and has followed up since with a slew of 12”s over the the last few years. His DJ sets gravitate towards the Detroit/Chicago House/Techno side, always with room for disco and soul.

Andrew Allsgood (Shawinigan Lake)
https://soundcloud.com/andrew-allsgood
Lifelong music freak, Andrew Allsgood started spinning on the Toronto DJ scene back in late 90s and then transplanted to Vancouver Island in 2014. Always one to champion new, left of center sounds as well as looking back to the origins of dance music, Allsgood incorporates classics and new alike into his creative DJ sets. With releases on highly touted labels History Clock, Beard Science, Truffle Music and his own Free Association project, Allsgood’s international profile as a solid purveyor of underground sounds keeps growing.

Jen Li (Victoria)
https://soundcloud.com/jen-li-636879132
He are very happy to host Jen Li's debut Copper Owl performance. Keep an eye out for a bunch of talented up and comers at Frequency Saturday.