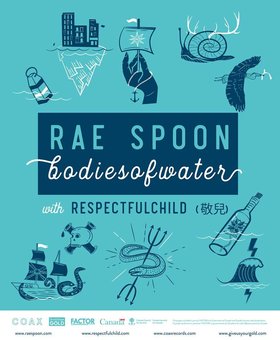 Rae Spoon’s bodiesofwater comes out on the twentieth anniversary of the first show Spoon ever played, and ten years after the release of their break-out album superioryouareinferior. As a non-binary person, Rae is no stranger to having an identity that doesn’t fit societal and legal structures. Like bodies, water is regulated and increasingly commodified, despite being fundamental to life. On this, Spoon’s ninth album, they explore their common ground and connections with the ocean surrounding their Vancouver Island home. Rae will be accompanied by respectfulchild. http://www.raespoon.com

respectfulchild (敬兒) is the solo instrumental project of Gan from Saskatoon on Treaty 6 Territory. Their music is both “electronic” in nature while being acoustically created, building experimental ambient soundscapes through slow progressions of meticulous improvisation. With a sound that has been likened to artists such as Brian Eno, Nils Frahm, and Owen Pallett, the lone presence of respectfulchild is able to bring quiet to even the noisiest of rooms.
The name respectfulchild is the literal translation of Gan’s Mandarin name 敬兒[jìng er]. This name was given to Gan by their grandmother when they were born, a name and a culture they’ve become estranged from having lived their whole life in the predominantly white world of the Canadian Prairies. The music of respectfulchild is Gan’s quiet way of seeking meaning in 敬兒 again http://www.respectfulchild.com

There are no steps to get in. There's a ramp installed. The bathroom doors are wider than standard doors, but there are no bars in the washroom.

~
Supported by Creative BC and The Province of British Columbia ~