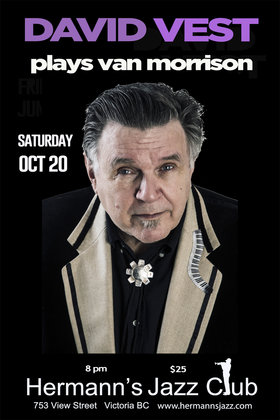 Music: Jazz / Blues
As always with David Vest. this is no "tribute" show but an opportunity to hear David and his fine band explore yet another iconic artist’s music. They’ll play songs spanning the long and incredible career of Van Morrison, the king of Celtic soul. Morrison is not only a great singer, he is also a genre-defying musician and one of modern music’s greatest songwriters. In Morrison’s music, jazz and blues go hand in hand with great poetry — meaning that you can expect to see Ray Charles and John Lee Hooker walking side by side with William Blake and William Butler Yeats, with Mahalia Jackson leading the way.

David’s band for this show welcomes a very special guest, legendary drummer Chris "The Wrist" Norquist, a drummer of the year nominee at the Maple Blues Awards.