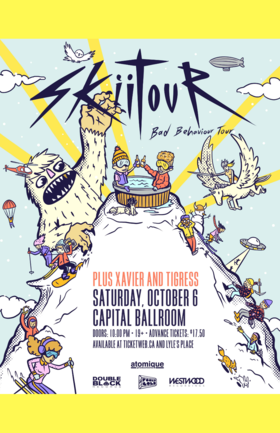 Music: Electronic / DJ
Fusing two fresh-off-the-mountain electronic music addicts, Tim and Dave together create 12 feet and 350 pounds of turbo-funk-boosted, snowsuit-donning man flesh. Hailing from the world famous ski town of Whistler, this dynamic duo loves shredding fresh power almost as much as they love smashing out hit-records in the studio.

Producing & performing together for over 6 years, they are like savage yetis feeding off of each other during their high energy live shows (which often feature snow machines & loud retro ski gear) while they blast through genres playing everything funky from bassline house to black-diamond twerk.

The boys have released tracks on labels around the world including Westwood Recordings, Good For You Records, and Fort Knox Recordings. In the spring of 2016, they started up their own record label, Double Black Records. While constantly developing their sound, they have enjoyed chart success on Beatport & have cracked almost 2 million plays on their Soundcloud. Their tracks have been on festival stages all over the world, charted by Miguel Mig, & even dropped into Bondax’s sets. They were recently featured by Vice's Thump as well as DJ Mag Canada.

Their hectic schedule over the last couple years has included dozens of headlining slots at electronic music festivals from coast to coast in Canada, numerous performances in the USA, plus tours of Australia & Europe. This past summer they made their 5th consecutive appearance at the acclaimed Shambhala Music Festival and smashed out 2 packed sets at The Fractal Forest & The AMPhitheatre.