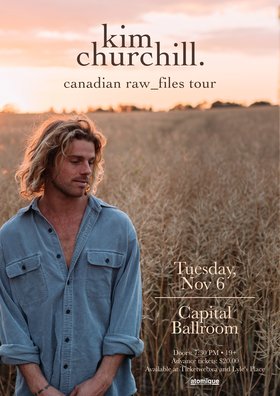 Music: Pop / Rock / Indie
Kim will be performing a solo, stripped back show with a free-flowing, story-telling take on older and newer tracks.

When you first encounter him, soft-spoken Kim Churchill seems like an archetypal blond, blue-eyed surfer from southern New South Wales. But behind his laidback demeanour and even tone, the 26-year-old singer-songwriter has a secret: he’s an extreme risk-taker.

Churchill spent 18 months working on the follow-up to his breakout LP, 2014’s Silence/Win, and received a stamp of approval from his record label. Album-release plans were drawn up and Churchill began to field offers from festivals and concert promoters around the world. But the new record – polished and accessible – didn’t quite feel right. At the last minute, Churchill decided to throw it out and start again.

“I worked really hard on the follow-up record for a long time,” he explains – “and it sounded good. But some very subtle layer of my consciousness was saying to me, ‘It’s not all that inspiring.’”

So Churchill picked up his guitar. He wrote a second version of the album in one frenetic week, then spent two months piecing together the new recordings with ARIA-winning producer Ian Pritchett in a garage in Western Sydney. The resulting LP, Weight_Falls, is a kaleidoscopic collection that is bound to take both fans and critics by surprise.

Ocie Elliott is musical duo Jon Middleton and Sierra Lundy from Victoria, B.C., Canada. The two have come a long way in a short time since a chance encounter in a Salt Spring Island café led to a spark, collaboration, and their ultimate partnership in music and beyond. That was hardly two years ago, and Ocie has been busy, releasing both an EP and... more info
Submit info on this show to our admins