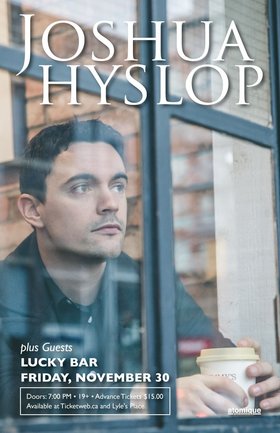 Music: Pop / Rock / Indie
Joshua is a modern folk musician, an amalgam of influence in the classically romantic tradition of Damien Rice, Ryan Adams, Iron and Wine, and Sufjan Stevens. Like the said ballyhooed folksters before him, Joshua is inspired to write largely as a result of the people and relationships surrounding him, while also subjecting his songs to his own vulnerabilities, doubts, and conflicts.

"Josh is an amazing songwriter with a voice that will melt the toughest heart!." - Terry McBride - Nettwerk Records

"Great music. One of the warmest, soothing and rich sounds I've heard in a long time. Josh has created a beautiful, intimate soundscape backed with superb production - A pleasure to listen to!! - Alex Wharton, Abbey Road Studios

"One of those superbly talented performers that seems to come from out of nowhere. Young Mr. Hyslop has a singer-songwriter maturity far beyond his years." - Mark Rheaume – CBC Radio