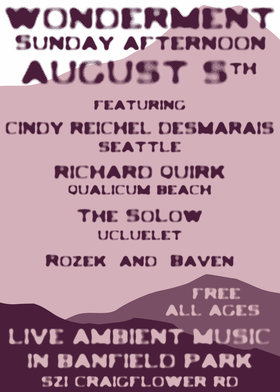 Music: Electronic / DJ
Wonderment returns to Banfield Park for its third year with live ambient performances from some of the Pacific Northwest's most notable modular synthesists:

CINDY REICHEL DESMARAIS: Patchwerks, Seattle
Cindy is a co-founder of Patchwerks, the first modular-focused boutique in the Pacific Northwest. She also runs workshops and performs in the Seattle area.

RICHARD QUIRK: Isle of Man / Qualicum Beach
Richard Quirk is a Manx-Canadian who has been releasing music since 2011 as a solo artist and with the bands The Chasms, Twice Dead and Sandfingers.

THE SOLOW: Ucluelet
The SoLow has been releasing videos of his modular experiments from his laboratory on the Western shores of Vancouver Island, imbibing the best of classic chillout in his sound.

ROZEK & BAVEN: Victoria
Chris Rozek has been making electronic music since the early 90s, having released on the Canadian labels Swtich Records, Nice + Smooth, and Revolver Canada. He has been active in the modular synthesis world for over a decade, including designing and building his own synthesizer modules. Baven is no stranger to the West Coast electronic music scene, well-known within house and techno circles. This will be Baven's first live performance in an ambient context.

WONDERMENT features live ambient electronic music performances on multi-channel sound in Victoria public parks. WONDERMENT events are all-ages and free. There are no traditional stages at Wonderment events, and the public are welcome to get close to the artists to observe their craft (please be respectful of artists while they are performing, reserving questions about equipment and process to either before or after their live set). If bringing a picnic, please pack-it-in/pack-it-out and be mindful of CRD prohibitions on smoking in public parks. Although this event will be held in Banfield Park, adjacent to the Victoria West Community Centre, please note that the community centre will be closed for the August long weekend. Washroom facilities may be found along the multi-use trail along the Gorge Waterway between the Selkirk Trestle and the Bay Street Bridge, or at neighbouring businesses along Craigflower Road. Please stay hydrated and bring sunscreen!