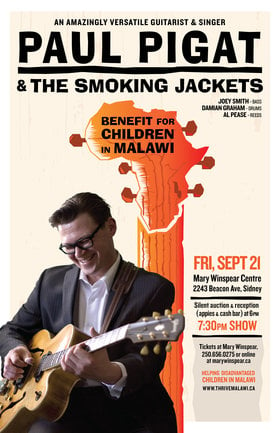 Music: Jazz / Blues
The benefit is for Thrive Malawi, a volunteer local Canadian charity supporting programs for disadvantaged and disabled children in Malawi.
Paul Pigat is a Vancouver based guitar virtuoso, who has been described as “one of the most restless, combustible musical imaginations ever crammed into a single body – there aren’t many genres of music that don’t pull at Pigat’s wayfaring imagination”. His shows are upbeat, creative and dynamic and inevitably leave his audiences wanting more of his infectious music.
Paul is backed up by the “Smoking Jackets” - Victoria’s own Damian Graham on drums, Joey Smith on bass, and Al Pease on reeds .
The evening also includes a pre show reception with appies, desserts and a cash bar, plus a silent auction featuring a wide variety of goods and personal services.

Doors open at 6 pm for the reception and silent auction, with the show starting at 7:30 pm.

Come and join us for a most enjoyable evening, while supporting a great cause!