Alden Penner is a producer, multi-instrumentalist, composer and singer. He is a co-founder of the bands The Unicorns and Clues and has been touring the world and releasing music since the year 2000. He uses voice, amplifiers, guitar, synthesizer, drums, and other instruments to explore the sonic potential of the resonating body itself.
Penner's high school band The Unicorns came to prominence with the 2003 album Who Will Cut Our Hair When We're Gone?, a whimsical mix of indie rock recorded to tape and computer. He has scored and produced music for 60's Canadian film provocateur Larry Kent's The Hamster Cage and the 2009 indie movie Paper Heart. In 2011 he made a 3-month trip to Mali. There he played and recorded with musicians and developed material on guitar based on the language, tuning and rhythm of Bamako. He has worked with labels such as Rough Trade, City Slang, Alien8, Constellation, Art School Dropout, and Suicide Squeeze. His music has been featured in a Crayola commercial and the Netflix series Love. In 2014 he played Barclay's Center and The Forum opening for Arcade Fire. He released a single featuring Michael Cera and toured Europe with the actor in 2015.
Following stays in Italy, New York City and rural Quebec, Penner is playing new and old material live in Canada with Devin Brahja Waldman on drums as well as 2 solo performances. He is releasing a new album and playing in Europe later this year.
https://aldenpenner.bandcamp.com/

Devin Brahja Waldman grew up playing with the poets. He is a New York saxophonist, composer, synthesizer player and drummer. He has collaborated with his aunt —poet Anne Waldman— since the age of ten. Waldman leads a NYC/Montreal group known as Brahja, the Ineffable and is a member of both NYC's avant-futurist ensemble Heroes Are Gang Leaders (led by poet Thomas Sayers Ellis and saxophonist James Brandon Lewis) as well as the Egyptian/experimental large ensemble Land Of Kush (led by Sam Shalabi). Over the years, highlight performances have been with Malcolm Mooney (of CAN), Patti Smith, Thurston Moore, Godspeed You! Black Emperor, Yoshiko Chuma, CAConrad and William Parker. As a youngster, Waldman fell upon the freewheelin' tutelage of Paul Bley. Waldman is a co-producer for Fast Speaking Music —a NYC music and poetry label.
http://www.brahjawaldman.com/

respect the venue and its patrons and get weird.

Style: Ish from Victoria BC
Available for Shows/Gigs 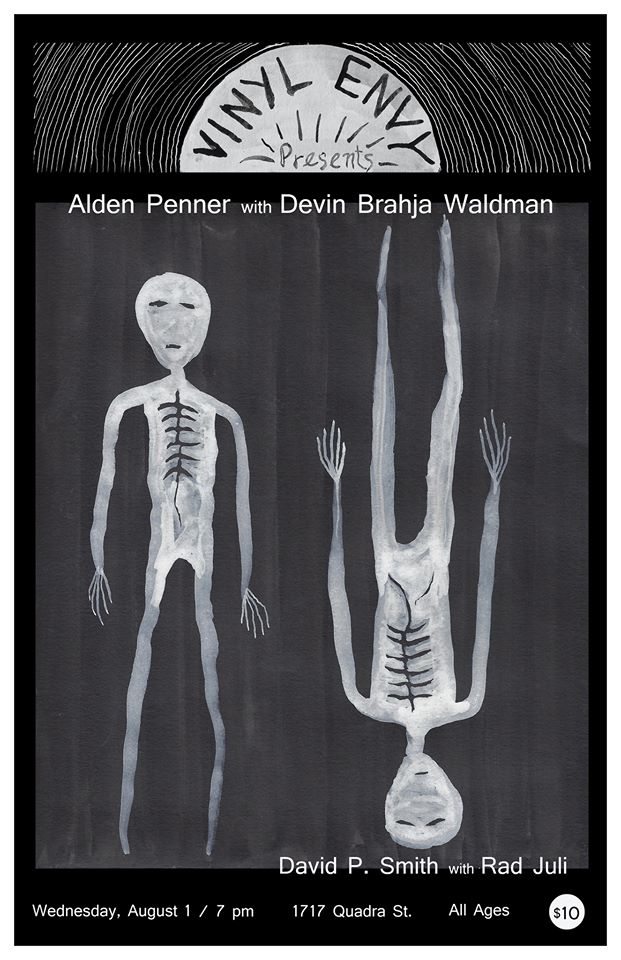