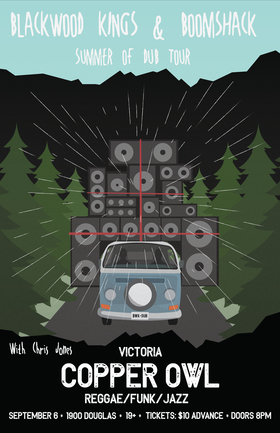 Now over five years into their lifespan, Blackwood Kings has proven to be one of the more unique bands to pop up in the Victoria BC scene. A dub-reggae crew at its core, the eclectic band also pulls from equal parts punk, prog, and jazz to make a left-field take on the genre that needs to be heard to be believed. Blackwood Kings' varied and malleable style has allowed them to share the stage with genre heavyweights such as Authority Zero, J-Boog, The Slackers, The Mad Caddies, The Skints, and Third World.

Boomshack might be the hypest dance machine on the island. They play an infectious mix of jazz, funk, reggae, and Latin styles that is guaranteed to get feet stomping and bodies swaying. Their explosive live show and air-tight hooks have made them an island festival favourite, boasting appearances at the likes of Fernfest and the Victoria Ska and Reggae Fest.

As a member of local acts SweetLeaf and The Leg-Up Program, Chris Jones is no stranger to the Victoria scene. The Ontario transplant has made his presence known with catchy hook-laden songwriting and ripping guitar leads. He'll be performing a rare acoustic set. Maybe we'll even get a bluegrass song. We heard he loves bluegrass.

Tickets are $10 in advance.

Now five years into their lifespan, Blackwood Kings has proven to be one of the more unique bands to pop up in the Victoria BC scene. In spirit and ethos, they’re a punk band, but while contemporaries may lean towards buzz-saw-distorted guitars and shouted vocals, Blackwood Kings favour the reverb-laden upstrokes of ska and dub, producing a polit... more info
Articles: Interview with BLACKWOOD KINGS